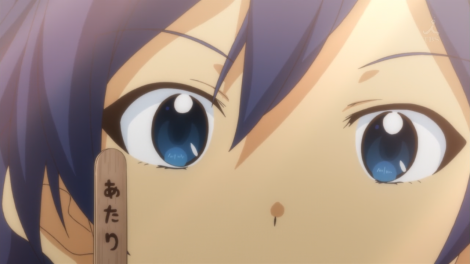 Like every good anime high school, the Stella Girl’s Academy has its very own cultural festival. Appropriately, the C3 bu performed a flag routine the previous year, to mild success. Karira only messed up three times after all! However, due to lack of funds the C3 bu has to make due with what they have around the club room for festival booth. Prepping for upcoming tournaments takes lots of money!

The genius idea they end up coming up with is a cosplay shooting cafe. Genius, 10/10. Though, this after their first two ideas: goldfish scooping and haunted house are foiled by Rento’s lobster/crawfish thing. I don’t know what’s funnier, the fact that she thought people would want to scoop up a lobster or the fact that keep calling it a cockroach. Auspiciously, Sonora manages to borrow a “shooting massine” from the shooting range. I personally think she blackmailed someone for it. 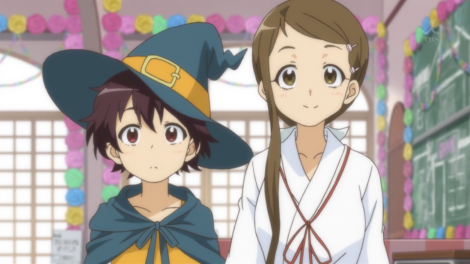 I’m surprised that the cosplay shooting cafe doesn’t draw more costumers at the beginning. Though, given that Stella Academy is a place for proper ladies, I guess it makes sense. Given that most of their initial costumers are guys visiting from outside the school, Honoka totally takes advantage of their stupidity for maximum profit. This culminates in Operation: Dripping Wet, which involves magic dissolving paper and the girls wearing swimsuits. Man, two swimsuit episodes in a row.

Yura and Sonora end up pitted against each in a watergun quickdraw duel. Channeling her inner Clint Eastwood, Yura manages to come out on top, but only because Sonora was distracted by a kid who was possibly in danger. Once again, we see the difference between the two when it comes to airsoft. Yura becomes too engrossed in the atmosphere, which causes her to become unobservant of other possibly important things.

This episode, we also learn a bit more about Yura’s past, particularly her time in middle school. As we gathered in the first episode, she had a hard time making friends in middle school. Whether it’s the fault of her shyness or her classmates being douches, Yura was pretty much ignored during her middle school cultural festival, which is really sad. So it’s easy to see why she tries so hard to be of use for her club and why she fears her new friends leaving her. Next episode, we can expect to see more of the Karila’s twin brother and his friend whose gender I’m still not quite sure of.