I love series that can strike an impeccable balance between comedy and serious drama, and Fate/kaleid is no exception to this great pattern. Coming off of the high that was the last episode, where we had the epic showdown between Archer Illya and Shadow Saber, we have a more comical episode where we learn that Illya caught a fever. Whether it was from using her newfound power or just staying out too late, we’re not too sure. Regardless, Illya is granted a free day off from school, which would normally be cause for celebration, but Illya gets quite bored with all her free time. 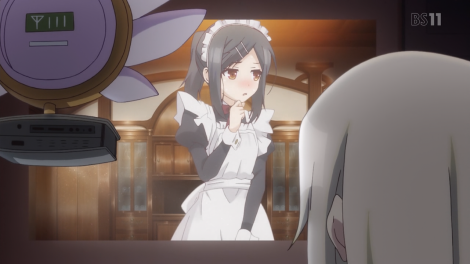 Among Ruby’s many skills, it turns out that she also doubles as Skype. With this new functionality, Illya’s able to catch Miyu in an incredibly embarrassing outfit. It turns out that she works as a maid for Luvia, in exchange for room and board. It also turns out that Illya has a maid fetish, which creates some interesting developments between her and Miyu. Aside from Illya essentially assaulting her, they both decide that they’ve finally reached the point where they can call each other friends. It’s a really cute moment, but of course it can’t last forever.

This is where the series shines in the complete opposite side of the emotional spectrum, when the team go after a new threat. The latest target is none other than Assassin, a warrior that can strike swiftly from the shadows, causing a lot of trouble for Illya in particular who gets nicked by a poison dagger. This triggers her fears of death that had laid dormant since the previous battle, which is totally understandable since she really is only just a little girl.

Because of the poison and her hesitance, Illya becomes an easy target for Assassin who conjures a battalion of soldiers to eliminate her. In the nick of time, Illya is able to unleash a massive wave of mana that wipes out everything around her. This would have killed Miyu, Rin, and Luvia if it weren’t for quick thinking by Miyu. She gets mad at Illya, but I really don’t see why. I was an accident that actually caused more good than bad in the end. It’s also not like this is a common occurrence either. Definitely not worth throwing away a newfound friendship for, anyway.