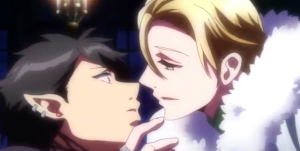 I have watched shoujo before, but nothing like this. Makai Ouji: Devil and Realist is a series from Dogakobo that appears to revolve around boy’s love. I could be wrong, but those are the vibes that I am getting from this things. The actual story involves King Solomon from the Old Testament and the election of a new King of Hell. I guess it is time to get to the first episode.

Well, a goat butler is an odd thing.

William Twining was about to enjoy his holiday when he receives an odd message. Even though he is part of the greatest lineage in Britain, his tuition has not been paid. It turns out that his uncle made some poor investment choices and lost everything but the house. While searching for anything of value, William stumbles upon an odd room with a crazy symbol on the floor. The symbol is activated by William’s blood and a strange man appears. He claims to be Dantalion of Hell. William doesn’t believe that, so he sends the guy off with the police. A return trip to the odd room gets William sent to Hell where he meets Dantalion’s butler. Nothing makes sense and an attack from another demon makes things even more chaotic. Luckily, Dantalion shows up to save the day, but the fight gets a little too intense. William is able to stop the fight with a few words and the guy gets to go home. William ends up back at school with his tuition mysteriously paid off and a new transfer student that is obviously Dantalion. This was a crazy episode.

I am happy with one of the characters.

We haven’t met a lot of people yet, but that will change pretty soon from what I can tell. The people that we have met thus far are both humans and demons, but they do have some things in common. They seem to be interested in the main character. I don’t want to sound presumptuous, but I am guessing that this is a boy’s love series.

William Twining is our main character. He is the descendent of King Solomon, but he does not share the same drive to be connected to religion as his ancestor once did. William is the realist in our story. A man of science that plans to use his family wealth to get through school and gain political power. William is very unyielding and he will not accept things that science does not support. Unfortunately, the realist is in charge of electing the next King of Hell.

Dantalion is a grand Duke that commands thirty-six armies of Hell. Even though he is a powerful candidate in the race to become the next ruler of Hell, the guy seems pretty desperate to connect with William. It seems as though the Duke has an odd connection with the guy’s ancestor.

Kevin Cecil is William’s butler. He is the only servant that did not leave when the Twining family lost its fortune because of his great loyalty. That, and the fact that he is banking on William getting lots of bribes as a politician that will make him a butler of a rich man once again. Kevin is crafty and very reliable as a servant.

Isaac Morton is William’s friend from school. He is much more bright than the serious William, but they seem to get along fairly well. Isaac is a big fan of supernatural things and he will probably help William come to terms with his role in the election for Hell’s next king. That is only a prediction, but it seems plausible. 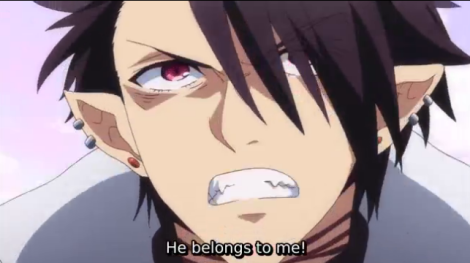 That is a bold statement.

I am very mixed on this series. I am a fan of its connection to Christianity and I think that a struggle for the throne of Hell is very interesting. We saw a fight scene and I don’t think that they will completely disregard that part of the story. However, it is the possible romance that has me worried. If this is indeed a boy’s love series, then I am not sure how I will take it. I have never watched one before, but there are a lot of stigmas regarding such things. Honestly, that may come from bigotry, but stereotypes start somewhere. I am not against a gay romance, so that in and of itself will not stop me from enjoying this series. I just can’t tell what kind of series this will be from the first episode alone. I am definitely looking forward to more of this king candidacy stuff. The series has the comedy tag, so I am hoping for some good laughs along the way. Also, I am always excited when Jun Fukuyama is part of an anime. 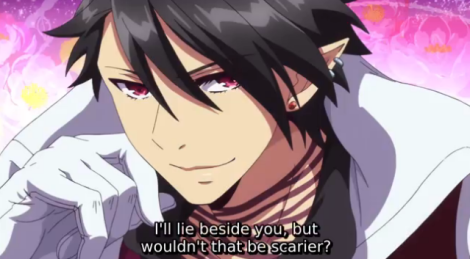 This guy doesn’t seem very scary in all honesty.