We’ve barely gotten into the new season of anime, and already we have one of the most talked about shows in recent memory.

Aku no Hana (The Flowers of Evil) follows Kasuga Takao (Shinichirou Ueda), a misunderstood teenager who loves to read. On the surface, he seems very average even for a typical anime protagonist. Academically speaking, his grades seem to be just below average, yet his literary chops seem to be fine tuned. His room is covered top to bottom in worn paperbacks and always seems to carry around a book everywhere. He has a close knit group of friends that he hangs out with frequently, though it seems that on some deeper level his knowledge of literary works such as those of Charles Baudelaire has him feeling alone. And of course, he has a crush on the class beauty Nanako Saeki (Yoko Hikasa), though it doesn’t look like he can work up the courage to communicate to her other than the occasional stolen glance.

This episode is a really slow burn. There isn’t actually much going on, as it follows Kasuga through a couple of normal school days. He reads, chats about manga with his friends, stares at Nanako every now and then, and goes home. If ever I needed a definition for “slice-of-life”, this would be it. It is mundane, and the pace can drive you mad if you’re impatient to know where the plot is heading. It’s an exercise in subtlety, as there are hints of something deeper bubbling up inside of Kasuga. There are frequent references to Charles Baudelaire, a famous French poet that Kasuga admires greatly. Of particular note is the poem Les Fleurs du mal (The Flowers of Evil), which Kasuga recites passages from. Though nothing seems terribly wrong with Kasuga’s life, there seems to be something deep within him that’s growing, and I’m sure it’ll be the catalyst for the things to come.

Surprisingly, this episode managed to portray people much more realistically than in most anime. You catch occasional snippets of conversation between students, often about some ordinary topic such as an upcoming quiz or plans for the weekend. Kasuga’s two friends joke around like typical guys and are quick to make fun of each other. One interesting moment I wanted to mention was a scene during PE when the boys are watching the girls playing volleyball. One of Kasuga’s friends casually remarks “If the thighs aren’t at least a little thick, they’re not really thighs”. And true enough, some of the girls have a bit of meat on their legs, so to speak, rather than slim and perfect legs you often see in anime. It’s thanks mainly in part to the series’s attempts at realism, and also to the animation itself.

Now, the most controversial aspect of this show is the animation, namely the fact that it uses rotoscoping for all of the characters. For those of you who don’t know what that is, it’s an animation technique where animators trace over live-action footage frame by frame to give the image a more realistic look and movement. A famous example can be seen in a-ha’s music video for Take On Me. I’m a bit divided on the decision to use rotoscoping for all of the characters. There are times when it actually looks good and fits well with the direction the producers are trying to take this adaptation. Since this is a psychological drama, giving the anime a more realistic look can add tension and make the audience feel much more uneasy.

However, the quality is inconsistent at best. The motions aren’t very smooth. The characters can look a bit jittery, even when they are sitting down at a desk or simply turning their head. Other times, their faces look contorted or unnatural, giving the unintended (or perhaps intended) result of having the faces drift further into the uncanny valley. One really odd thing I noticed was that details in the animation tended to get lost the further into the background they were. In one of the earliest scenes where Kasuga is walking down a street, we see other students walking in the same direction towards the foreground. From afar, their faces are practically blank and expressionless. As they move closer, lines start to fill in for their eyes, mouth, nose, and chin, until at least a face can clearly be seen. It’s a bizarre animation effect that can be distracting at times.

Then are times where the faces just look awful. A few examples: 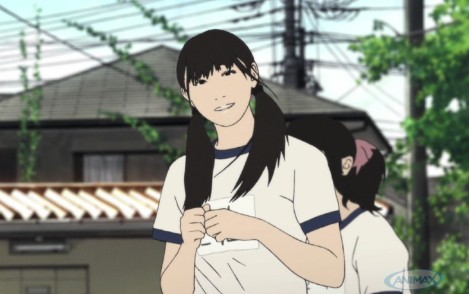 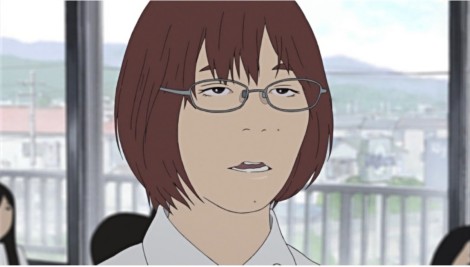 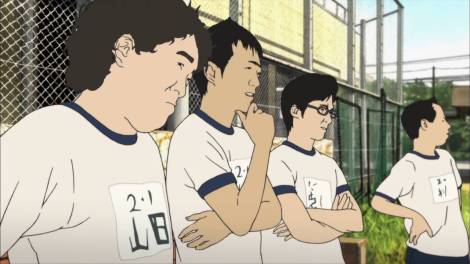 My crazy theory on why the producers decided to go with the rotoscoping? The unattractiveness of the animation is meant to represent the ugliness of the human soul. The human face is easily distorted, and viewed from afar, everyone has the same blank expression. It’s as if they’re saying “Take a step back, and everyone is the same.” At least, this is what I believe the producers are trying to get across. I could just be overthinking it.

With Aku no Hana being heavily criticized across the anime community, what’s my opinion of it all? Frankly, I think it’s an interesting presentation that allows it to stand out from the crowd – once you get used to it. I’m very much intrigued by the psychological elements of the plot that the manga is known for. We’ve already seen hints of it in the form of that creepy eye thing that seems to embody something in Kasuga. Then there’s Sawa Nakamura (Mariya Ise) whose quiet demeanor hides something sinister. As far as first impressions go, I’m willing to temporarily look past the unusual art style and lackluster writing to see if they can create the intense psychological drama this first episode wishes it could be. 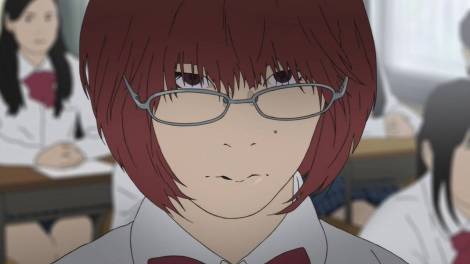