It may not be everything that I hoped for, but this episode introduced some very interesting stuff. We are starting to get some light shone upon the insect men and I am a big fan of that. I am barely disappointed in the supply of romantic moments between Jinbei and the Mushibugyou.

The insect men have made it to Kishuu, but not in the way that I expected. Instead of coming for direct conquest, Yukimura has come with a request. He wants the people of Kishuu to construct a massive battleship for him. Obviously, obtaining something like this would make his forces nearly unstoppable, but a lord must look out for his people. Agreeing to construct this ship in exchange for the safety of Kishuu was a deal that had to be made. Unfortunately, this is not good for Jinbei and company. The trio continued on their journey to Kishuu, but things were not looking good for Jinbei. Ooka continues to criticize Jinbei due to his inability to adhere to traditional samurai ways. Jinbei is fueled by his emotions and he does not follow the proper protocol when it comes to completing his mission. Although it is odd to Ooka, we all know why Jinbei was selected for this mission. The Mushibugyou wants to spend time with Jinbei and the team did successfully enter Kishuu. The bad thing is that an impossible choice has to be made. The lord of Kishuu must bring the heads of Jinbei and company to Yukimura or give up the lives of his people. Things are really heating up.

This thing is supposed to restore the Mushibugyou’s power.

Things are getting very interesting in Mushibugyou. What is my favorite new development? The stuff regarding the insect men. I am guessing that they plan on taking over Japan. I only say that because I don’t know if an anime will have the bad guys prioritize taking over anything that isn’t Japan. There is no way that Yukimura wants that ship for anything besides taking over stuff. Next, there is something that the guy who fought Jinbei said. Unless I got a weird translation, the guy said that he became an insect man. That, and the legend of Yukimura from ages ago supports the theory that people become insect men. If that is the case, then I wonder how one qualifies for that.Would the Mushibugyou qualify because of her abilities? Should I consider her one already because she can grow poison butterfly wings? Are the insect hunters in any way related to the insect men? Aside from the romance, the mystery behind the insect men is the thing that I care about the most in this series. 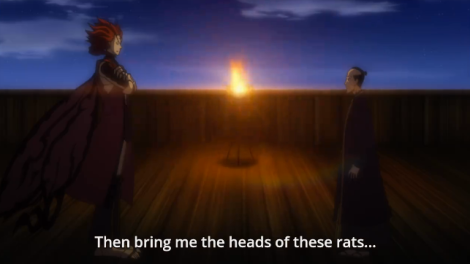 That is going to suck.

I am really wondering how Jinbei and company are going to get out of this one. It doesn’t seem like Yukimura and the insect men are going to simply leave if the group escapes. On that note, I doubt that Jinbei, Ooka, and the Mushibugyou can defeat them because Yukimura seems like he could be one of the big bosses. I assume that the king is stronger. So I really just do not know how this part of the series will work out. I don’t see the rest of the city patrol coming to help out. The only thing that I can see happening is the Mushibugyou getting captured as a higher priority than the ship and Jinbei returning with Ooka to Edo with shame on their faces. Then, an arc dedicated to saving the Mushibugyou will start and wrap up the series. I am usually wrong about things like this, so expect the series to go in a completely different direction. I am really looking forward to this ordeal because it promises to have nice action and some romantic moments. I did enjoy the cliff walking that went down in this episode. 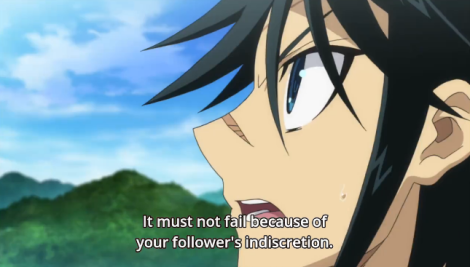 I can see this going bad and that sucks.