Things finally get more interesting in the show’s second episode.

With Miyuki now attending Izumiko’s school, the two do their best to put up with each other. Of course, neither of the two enjoys the other’s company, so things are a bit awkward. After seeing the way he think of her in the previous episode, it’s no surprise that an uncomfortable feeling persists. It’s like when Batman and Catwoman were forced to work together in Arkham City: neither of them wants to, but they have no choice.

Izumiko ends up asking Miyuki to accompany her to meet her mother during the school trip to Tokyo. During the trip however, Izumiko is troubled by a dark presence that she’s felt since they left, and though she can’t explain what it is, she is terrified. Things get even more cryptic when her mother cancels the meeting, warning them that they in danger of being caught by someone (or something), and that they must seek refuge at her home. The sense of paranoia and mystery is done really well, as the audience, like Miyuki, has no idea what exactly is going on or what is following them.

As night falls and it begins to rain, we see a shaken Izumiko slowly losing her composure as her fear starts to tightly grip her. A dark shadowy figure approaches them down the street, chanting some kind of spell, forcing Miyuki to grab Izumiko and take shelter in a nearby building. Just as he seems ready to counter with an incantation of his own, his father Yukimasa appears, drawing the presence away. Very suspicious that he would happen to be in the area, and that the presence would just disappear once he arrived. 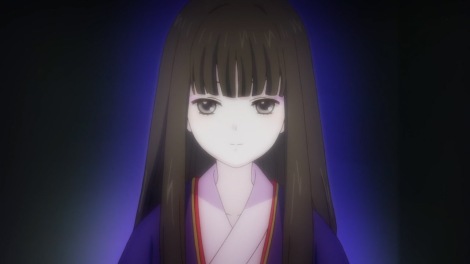 At Izumiko’s mother’s home, Miyuki makes his suspicions clear to his father that he was the presence Izumiko was sensing, though he denies it. Suddenly, Izumiko appears before them, but it’s not exactly her. She’s been possessed by a seemingly high and noble spirit, and we find out that Izumiko’s purpose is to serve as a vessel for this spirit. It was hinted in the first episode and the opening that there was a spiritual secret to Izumiko, but now it’s made more implicitly clear. The spirit reveals that Izumiko will be the last vessel she inhabits, and that she will likely disappear afterwards.

This episode raised a lot of new questions in addition to answering some previous ones. We still don’t know why Izumiko can’t touch electronics without destroying them. Perhaps it’s some weird side effect of having a spiritual connection? What about Wamiya, the student that Izumiko talks to at school. The guy gives off an extremely creepy vibe, especially when Izumiko glimpsed him watching her plane take off from the roof. And we still don’t know what Yukimasa’s end goal is. He seems the most suspicious individual of all, and even his son doesn’t know what he is trying to achieve. It all goes back to Izumiko, and her special role in the grand scheme of all this seems to be attracting unwanted attention.

Two episodes in, I’m only now starting to see the bigger picture. There’s a lot we still don’ t know, but there seems to be an air of mystery under the surface. There seems to be some dark force after Izumiko, which would explain why she lives with mountain monks and lives a sheltered life away from her parents. Getting to see how this plays out will be something to stick around for. And last but not least, we’re starting to see a change in the relationship between Miyuki and Izumiko. Though initially antagonistic towards her, Miyuki seems to have a change of heart as a result of the events in Tokyo. I’m sure we’ll get to see this develop more as he continues his role as her protector.