This has been a long time coming. It’s been over two years since I posted my Top 5 Reverse Traps in Anime list, which is already outdated, but it finally felt like the time was ripe to compile a video game version of the list. As with the anime version, the same set of criteria apply when picking the characters, with the first being the most important:

While we see very few reverse traps in anime, they seem much more prevalent in the world of video games. No, I’m not talking about that stupid Yu-Gi-Oh trap card that keeps popping up when I Google for reverse traps. I’m talking about the girls who kick ass, break down your gender boundaries, and look cool and cute while doing so. Though many of these characters get stuck in minor roles, here are 10 that stand head and shoulders above the rest. Guys wish they could be as cool as the girls on this list because let’s face it, reverse traps just make everything better. Why else do you think Super Smash Bros. is so great?

“My kick is matchless.”

I learned a lot of things today. I learned that the King of Fighters series started off being called Art of Fighting. I learned that King was the only female character in the original game. I learned that her gender was kept a secret too, only revealed when she’s defeated by an opponent’s special move, causing her male attire to fly off. Her hobbies include drinking wine, listening to jazz, and kicking lots of things with her distinct Muay Thai style of kickboxing. I have only the slightest experience with the series, but I imagine King is good. Her name is in the title after all.

“I’m so strong, I even scare myself!”

Just from looking at her picture, Judith seems like the furthest thing from a reverse trap. Well, it turns out that she, like many other girls further up the list, first appears disguised in other attire. In Judith’s case, Yuri and the gang first meet her when she is clad in her fearsome Dragon Rider armor, at Capua Nor. After a couple of not so friendly encounters with the mysterious knight, Yuri finds himself locked up in prison with the Dragon Rider, who then reveals her true identity to be Judith, a member of a minority race known as the Kritya. From this point on, she chooses to lose the armor on the account of its weight and resulting detriment to movement. Let’s face it, that’s a good decision.

“Don’t mess with a captain, sailor!”

Raised by a band of pirates as one of their own, Faris is as brash as they come, even disguising herself as a man when she comes to lead her own crew. You know you’ve made it as a woman when you can make the toughest men on the seas tremble in awe and fear beneath your command. Despite Faris’s domineering disposition, she shows an affectionate side towards her trusty sea dragon Syldra, who pulls her ship through the windless ocean. However, things become turbulent when their ship is attacked by the giant Karlabos, causing them to maroon in the Ship Graveyard. The unconscious Faris’s true identity is then revealed when our hero Bartz and old man Galuf help dry off her clothes. Classic. “He” indeed turns out to be a “she,” and on top of that, “she” is revealed to be a princess and Lenna’s long lost sister.

“For some reason a lot of girls admire me. It’s probably because I’m good at sports and for my looks, but deep down I’m a girl, too!”

Previously gracing our list of reverse traps in anime, Makoto bounces her way once again to this list. While she doesn’t pretend to be a guy, she unintentionally garners a massive fanbase composed primarily of teenage girls and middle-aged woman, thanks to her boyish charms. Despite Makoto’s desire to get in touch with her feminine side through becoming an idol, her usual jobs involve playing some sort of male character, earning her the title of the Idol Prince. When she’s not singing and dancing on the stage, you’ll likely find her next to a convenience store shelf, sneaking peeks at the latest shoujo manga and fantasizing about the day when her own prince will come riding in on a horse to sweep her off her feet. Don’t worry Makoto, we love you just the way you are. 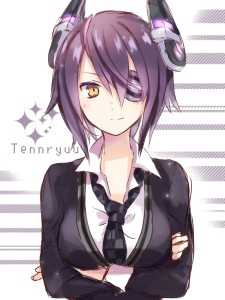 Known for her trademark eyepatch, floating horns (I still don’t know what those are), and incredibly coarse language, Tenryuu is my favorite ship in KanColle and the reason I started playing the game in the first place. As far as I know, she’s the only ship that uses 俺 (ore), the most masculine first-person pronoun in Japanese. While Tenryuu talks big, her firepower is actually among the weakest for light cruisers and is typically stuck doing expeditions with the small ships, thanks to her low resource consumption, rather than seeing full-fledged combat. As a result, she often gets put into silly babysitter situations in fan works, giving her a maternal and surprisingly warm side that belies her brusque exterior. Now if only we could get her Kai-ni in the game and have her to appear in the anime series.

#5. The Master Sword – The Legend of Zelda Series

“Thank you, Master Link. May we meet again in another life…”

How could I resist putting the Master Sword itself on this list. Or perhaps I should say “herself” because in Skyward Sword, it’s revealed that the spirit Fi resides within the legendary blade of evil’s bane. Throughout Link’s journey, she proves to be a helpful companion, though most of the time this assistance is delivered in excess much to the player’s dismay. However, I think it says a lot about a character when you can yell at her and be annoyed with her for an entirety of an adventure and yet find yourself in tears when it’s finally time to say goodbye. Thankfully, it’s not farewell forever, as the bond between heroic master and faithful servant is one that is as timeless as the Legend of Zelda franchise itself.

#4. Sheik – The Legend of Zelda: Ocarina of Time

Who knew that the face behind the masked figure that accompanied Link throughout Hyrule would belong to that of a woman, let alone Princess Zelda herself. While Zelda is portrayed as a playful prankster in her younger years, concocting the almost ill-planned plot to overthrow the wicked Ganondorf, she grows up to be a fine woman with many thanks to the teachings of the Sheikah passed down by her caretaker Impa. Under the guise of Sheik, she becomes quite the acrobatic warrior and talented harpist, instilling Link with classic melodies such as the Minuet of Forest and the Nocturne of Shadow. Sheik also dabbles in some philosophical poetry, and I love her more recent redesigns in Super Smash Bros. and especially Hyrule Warriors. Creating her fighting style around a ninja is one thing, but centering it around playing the harp in Hyrule Warriors is simply brilliant.

“What’s past is prologue.”

Speedy sharpshooters who were able to complete the original Metroid in under 2 hours were given the biggest surprise in video games at the time. Underneath the armor and behind the arm cannon was a woman. A woman of few words, Samus is a character who, much like Link, lets her actions do the talking most of the time. Whether it’s shooting, jumping, grappling, or rolling around in a ball, Samus can do it all with remarkable finesse, and she’s not above using her weapon repository to seek vengeance against the Space Pirate leader, Ridley, for raiding her town and orphaning her. However, she shows a great deal of compassion, perhaps due to the circumstances surrounding her own upbringing, when she chooses to capture the last baby Metroid rather than exterminating it. This act of kindness would be repaid, in full, in a way that even Samus could not have predicted.

“I…I am a woman…and a detective. One who is seeking the truth with you and the others.”

The winner of the anime reverse trap list finds herself in the number 2 slot here, only barely missing out on the number 1 spot. Naoto is the most serious member of the Yasogami Investigation Team and is a bona fide detective at the age of 15, but she believes that she only got so far because she conceals her gender from her colleagues. This notion gradually dissipates as Naoto slowly begins to accept herself, regardless of the preconceived notions of others. Naoto’s all-business demeanor can falter at times, especially when mystery novels, machines, swimsuit competitions, or the protagonist are involved, bringing out an unexpectedly cute side when she becomes flustered. Alongside her persona Sukuna-Hikona, she brandishes a handgun in battle and can dole out barrages of Light, Dark, and Almighty damage, all of which are unique to the blue-capped detective’s arsenal. I’m not alone with my infatuation for Naoto, as Atlus has acknowledged her appeal, granting Naoto her own spin-off manga and light novel series.

“…and quite the actress too. Honestly, I’m surprised you didn’t figure it out until just now.”

When I discovered the truth behind the mysterious mask, I immediately went out and bought not only copy of Fire Emblem: Awakening but also a 3DS. Needless to say, I played without rest until I got to the point in which you meet Lucina, the time-travelling daughter of Chrom. Lucina hails from a ruined future where many of her friends and family have been all but extinguished by Grima, and she risks everything for the chance to rewrite history. To do so, she poses as her hero idol and distant ancestor Marth, down to his swordplay, and it’s a near perfect recreation outside of a few lost centimeters in the height department and the addition of a stylish mask. To me this shows that, whether she realizes it or not, Lucina, like Naoto, has a childish side, one that tells her that the most convincing disguise she can put on is a cosplay of a long dead hero. Her inclusion in the new Super Smash Bros. is icing on the cake for Lucina fans, and she deserves every bit of attention that she receives. Her ineffable conviction and courage in the face of hopelessness, as well as a keen sense of fashion, are why she is my favorite video game character of all time.