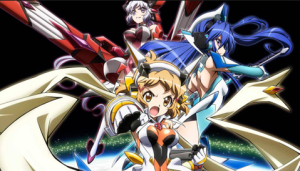 For everyone that is wondering, this is a sequel. If you want to watch this, then you really need to watch Senk Zesshou Symphogear. That is the first season and it is only thirteen episodes if you feel like getting started. I will say that I didn’t really expect a second season when I finished the first. There was room for more, but it was only there because they did that whole “the fight continues” thing at the end. Oh well, let’s get to it. 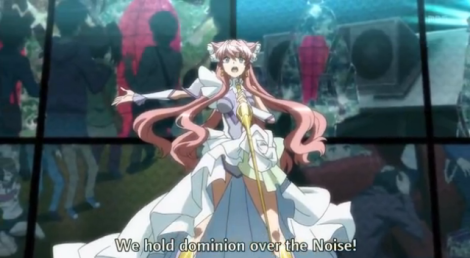 That does not sound good.

Finé was definitely not the only person that could control the Noise. Having said that, the organization that is controlling them nows calls themselves The Finé. Noise attacks are still a big problem and it looks like our heroes will never get to rest. What is interesting about this organization? There is an old woman with an eyepatch that may or may not be controlling things. Also, they may now control a complete relic because of a betrayal amongst the U.S. forces. They control a diva. Maria is not just an idol that got to perform with Tsubasa. She controls the Symphogear known as Gungnir. What? Yes, there is another Gungnir. This one is black and it raises a lot of questions. How can there be two Gungnirs? Why is this Gungnir black? How is this new group connected to Finé? I guess that someone always wants to conquer the world. 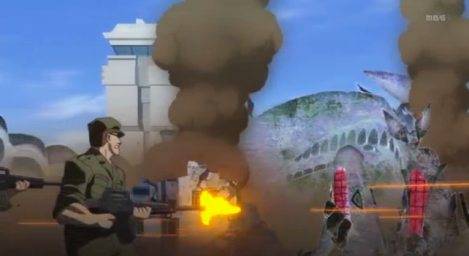 I will never understand this.

The episode starts out with Hibiki and Chris escorting a complete relic to a new location. After the Lunar Incident, Japan shared the Sakurai theory with the rest of the world. An apparent alliance between Japan and the United States was formed and the relic was meant to be turned over to Japan’s new ally for research purposes. Things went well until the Noise attacked and one of the researchers betrayed the United States. The soldiers did that thing where they waster bullets on things that do not take damage from said bullets. I will never understand this. Aside from that, The Finé basically declared war on the entire world during the concert. That seems crazy, but controlling the Noise basically means that you can do that. Not a lot happened is what I am trying to get at. 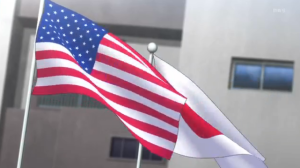 I am not sure how I feel about this new season. I didn’t really feel like this series warranted another season. I have seen much better get stuck at one for way too long. Having said that, my biggest complaint regarding the first season was wasted potential. I found the characters the designs and concepts in the plot to be very promising. Unfortunately, the writing was not very kind to be the better things in the series. You kind of need to explain things when you do them. This series could possibly do that. I am intrigued by a few things. The second Gungnir is interesting. Maria may be one of the survivors of the attack on the final Zwei Wing concert like Hibiki. Another explanation could be the fact that the Symphogear are fragments and some may be similar. Regardless, they are going to make Gungnir special because Hibiki is the main character. 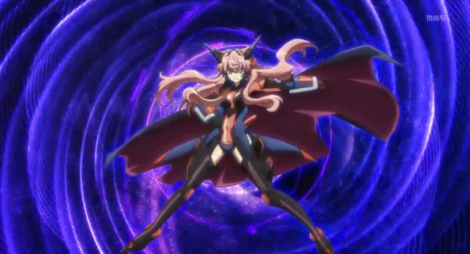 This is my favorite color scheme for Gungnir.

Here is something that will always confuse me about this series. I understand that the military has to get involved in order to facilitate a proper evacuation. However, the wasting of ammunition is what gets to me. The Sakurai theory was shared with everyone, so the futility of regular attacks should be clear to everyone. Guns are obviously a waste of time, but I see countless bullets wasted during these altercations. What is going to be different this time around? It certainly doesn’t seem like it even slows the Noise down. At best, it distracts them so that only soldiers die. That is kind of sad, but it would make some sense. Since this new season kind of caught me off guard, I am not sure what to expect from it. I would like to know about the commander. The guy has crazy spirit powers and we don’t know the explanation behind them. The source can’t be relics because he can’t damage the Noise. Oh well, I guess that I am looking forward to some writing that will hopefully be improved from the first season. 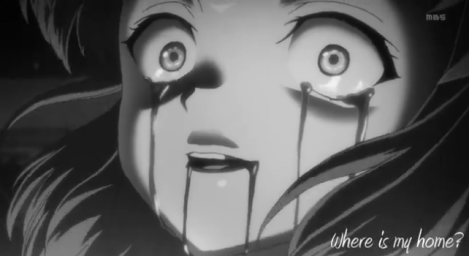