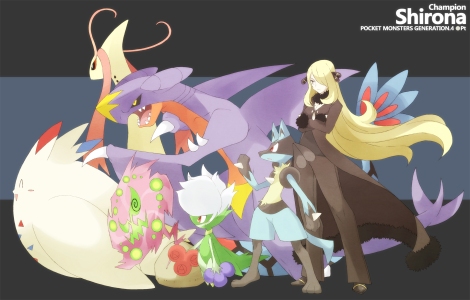 For each circuit of eight Gym Leaders, there is the mighty pantheon of Elite Four, and for every company of Elite Four, there must be a Champion to stand above them. From Kanto to Kalos, I’ve assembled who I believe to be the five best Champions, considering their Pokémon teams, personalities, designs, and significance to the plot of their respective games.

Every David deserves a worthy Goliath, and these five Champions dutifully play the part of the indomitable giant. 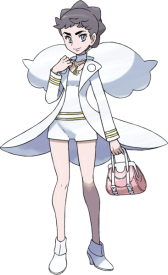 “It seems wrong of me to say this, but thank you! You saved us all… I can’t wait to see what you and your Pokémon are capable now that I know exactly what it is you’ve done already!”

The latest Champion to grace the Pokémon franchise may not be the most involved story-wise, but that doesn’t stop Diantha from shining in the limelight when the time for action calls. The Kalos iteration of the Pokémon League is the flashiest the series has ever seen, and Diantha’s position as its head is well-deserved. The fabled showdown takes place in the aptly named Radiant Chamber, constructed with lustrous architecture and an abundance of stained glass. Contrary to her graceful demeanor, Diantha sports some of the most ferocious Pokémon from the Kalos region including Hawlucha and Tyrantrum. However, her elegant design is perfectly complemented by her signature Pokémon, Mega Gardevoir. 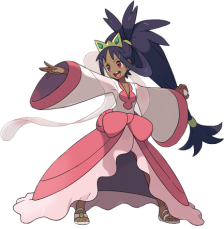 “Know what? I really look forward to having serious battles with strong Trainers! I mean, come on! The Trainers who make it here are Trainers who desire victory with every fiber of their being!”

Iris may be the second Champion to have been promoted from a Gym Leader and the second Champion to take dominion over Dragon types, but quite frankly, Iris is honestly much cooler than both Wallace and Lance. Don’t let the crown, young age, or poofy dress fool you, Iris commands some of the fiercest Pokémon in the game with Aggron, Druddigon, and Haxorus. That being said, Iris’s Champion theme has one of the most cosmically playful intros I’ve heard for a battle theme, and it sounds more at home on a Rainbow Road track than in Pokémon, but that only adds to her charm and matches the astounding astral backdrop of the battle. Even Gen 6’s 3D graphics and Diantha’s stained glass floors can’t compared to the feeling of battling Iris while soaring through space.

“I assembled teams that would beat any Pokémon type! And now! I am the Pokémon League Champion! Red! Do you know what that means? I’ll tell you! I am the most powerful trainer in the world!”

The original Champion who set the precedent for having one last, fearsome team at the end-game, Blue is undoubtedly the most powerful opponent in the series’s initial adventures. While Blue fills the role of Pokémon champion nicely, he really is, first and foremost, your rival. His cocky attitude and constantly growing Pokémon push the player to become stronger and seeing his starter, Pidgey, and all of his other Pokémon completely evolved serves as a reminder of just how far both of you have come. You, the player, and Blue both set off on a journey on the same day from Professor Oak’s lab, and it’s only fitting that the two of you reach the top at the same time as well, only to go toe-to-toe along with what may very well be the best Champion theme. The stakes of this title bout? The right to say “smell ya later.”

“The power you learned… I can feel it emanating from you. But that’s enough talk. Let’s get on with why you’re here. As the Pokémon League Champion, I accept your challenge!”

Paving the way for generations to come, Cynthia made her debut in the 4th generation of Pokémon games as the very first female Champion and a very badass one at that. Not only does she break the gender limitation barrier, she also boasts an amazingly well-rounded team that even Blue would be proud of, sporting the likes of Lucario, Spiritomb, and the brutally frightening Garchomp. Interestingly, while her trademark Pokémon is Garchomp (given that it has the highest level of any Pokémon on her team), her design is based off of Lucario, with hair clips that resemble Lucario’s ears. In Pokémon Platinum, Cynthia boldly dives into the Distortion World, a rift between space and time created by Giratina, without batting an eye. Although even if she did, it’d be hard to tell with her trademark fringed hair. 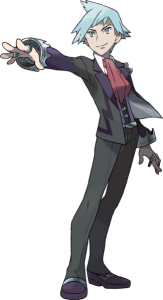 “What did you see on your journey with Pokémon? What did you feel, meeting so many other Trainers like you? What has awoken in you? I want you to hit me with it all! Now, bring it!”

While Generation 2’s Lance and his Dragonite army aren’t exactly the hardest act to follow, it doesn’t really matter since Steven Stone is my favorite Champion ever. I’m a big fan of unique Pokémon designs, and Steven commands some of the strangest Pokémon in the 3rd Generation. While some come in the fossilized variety like Armaldo and Cradily, we can’t forget the superstar Steel types on the team: Skarmory, Aggron, and Metagross. Plus, can we simply take a moment to appreciate how snazzy Steven’s redesign looks in Omega Ruby and Alpha Sapphire. Given his father is the wealthy president of the Devon corporation, it makes sense that Steven, in spite of his mineralogical persuasion and obsession with all things geology, dresses the part of somebody well-off, expensive rings and all.