I really need to stop doubting series with demons in them. The past few seasons have given me nothing but good things and my lack of confidence regarding them shows my inability to realize that a pattern is forming. Well, this is Blood Lad. A series from Brains Base that revolves around a vampire and a human that has turned into a ghost. That should be enough to entice you.

Well, an otaku vampire that is also a gang leader is definitely strange.

The human world is not the only dimension that supports life. There is a demon world that exists and is controlled by various bosses. Each one is in change of a territory, but they can be dethroned by challengers that seek the heads of the territory bosses. Basically, there are gang wars that go down in the demon world. Staz is the boss that we need to pay attention to. He loves stuff from the human world and he is overjoyed when a human girl wandered into his territory. Staz wanted to talk to her about human world stuff, but a challenger showed up and the vampire had to take care of business. Unfortunately, a monster plant got loose and ate the young girl. Yeah, she dies in the first episode. Fuyumi becomes a ghost and Staz loses interest in her. I guess a ghost is not as exciting as a human in the demon world. Although there was an attitude change, Staz did declare that he would return Fuyumi to normal. The two stumble across a gate top the human world and they plan on going there. Luckily, a doppleganger conveniently joins the crew, so Staz can leave for a short period of time. That is the first episode.

We have met quite a few people already.

Even though we have yet to meet all of the important characters, we did see quite a few in the first episode. Most of them were demons because the episode took place in the demon world, but there are going to be humans in the human world.

Charlie Staz Blood is a territory boss in the demon world. Staz is a vampire that sees no point in drinking human blood. Going to the human world is expensive and the sun is hot, so he likes to stay in his room. There he is your classic otaku. Playing games, reading manga, watching anime, and handling figures. Even though he is a complete shut-in, Staz is very strong and he will stick by his word. Oh, and he is not weak to garlic or crosses.

Fuyumi Yanagi is a young girl from the human world. She dies almost immediately after entering the demon world, so she is a ghost now. Fuyumi acts like your typical anime girl in this situation. She is oddly fine with her crazy situation and she is weak to cute things. Even though this series was not given the romance tag, there may be something forming between Fuyumi and Staz.

Deku is the second in command in Staz’s gang. That is an assumption on my part, but a solid one if you ask me. The guy is very mature and level-headed, so it balances well with the unreliable Staz.

I don’t know how important the rest of the characters that we met will be. Saty and Mamejirou work at a bar and support Staz, but I assume that we will meet more demons like that. It is safe to say that other important characters will pop up soon, so continue watching for more of those. I guess the only thing left to say here is that I love all of the characters thus far. 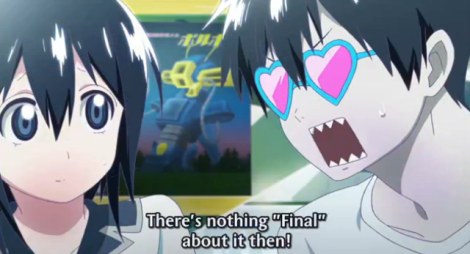 He is talking about Final Fantasy.

I see a lot of potential in this series. Ryota Ohsaka voices Staz and that has already made this series very enjoyable. For those of you that do not know of that person, he is the voice actor for people like Maou from Hataraku Maou-sama! and Eita from Oreshura. It seems like this will be a series that is heavy on the comedy and I need something like that since Hataraku Maou-sama! isn’t on anymore. The opening shows things like werewolves and whatnot, so I am really excited for some more supernatural stuff. I am really into these kinds of things, so I already have high hopes from a personal perspective from Blood Lad. At worst, I think I see this being a funny series that is a fun watch for me. I am really looking forward to the trip to the human world that they will make in the next episode.

People can get too caught up in things.