The following is an excerpt from a research paper I did almost three years ago for a film writing class, in which I discuss the influence that war memory has had on Japanese pop/subculture, particularly the works of Hayao Miyazaki. Following his recent retirement announcement, I thought it’d be appropriate to dig up this old thing and put it out for people to read.

However, this first part is more or less just an introduction of the topic. The intended audience for this paper was people who have no idea what anime or anything like it is. Still, I think you all can find things in here that you may not have thought of before! I plan to publish the entire paper in a series, so you can expect specific analyses in the future! And maybe I’ll add on some new material at the end about specific anime series or other films because this is such a huge topic. 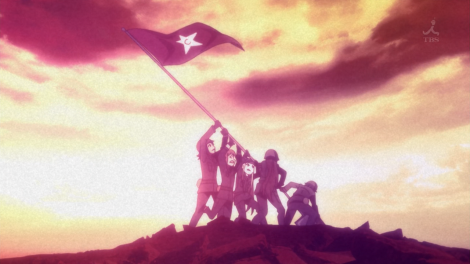 In the rapidly industrializing country of Japan, a unique wave of popular culture has become quite prominent within these last sixty years, providing an escape from the hustle and bustle of the everyday life. Looking at this new subculture, It’s apparent that World War II and the resulting industrialization have influenced the themes that appear and even the values that prevail throughout Japanese society.

Popular culture is often associated with the youth of a particular population, encompassing many different forms of media such as music, film, books, and video games. By looking into the effects that the memory of war has had on the themes and tropes that are found in the many forms of Japanese popular culture, we can relate these ideas to the values that the children were brought up on following the war and the effect this had on the generations to follow.

Japan has always been at the forefront of the proverbial cinematic stage, producing well-known directors such as Akira Kurosawa, Kiyoshi Kurosawa, and Hayao Miyazaki. Miyazaki is of particular interest, for the purpose of this topic, as the target audience for many of his animated films are children, who are growing up nearly two generations after the end of World War II. Despite the young age of his target audience, Miyazaki employs a large number of metaphors that relate to the war, even though these children have no particularly strong nor immediate memory of the horrific events that took place in their own home country.

Several recurring themes that are prominent in his works include feminism, anti-war sentiment, and environmentalism; all of which are rather democratic ideals that became prevalent, especially among the youth of Japan, following the end of World War II. With this in mind, we can surmise that the memory of the war, though horrific, has influenced the youth of Japan to adopt a more positive and progressive system of beliefs and ideals.

“Japanese Neo Pop,” is a term coined by Japanese art critic, Sawaragi Noi, and is defined as “an artists movement, which was initiated in the 1990’s by artists born in the 1960’s.”[1] The children that lived through the war, and who were affected by it, imparted their newfound values onto their children, who were most likely born in the 1960’s. This new generation of children in the ’60s took these values and incorporated them into this wave of Japanese Neo Pop.

Aspects of Japanese Neo Pop such as art direction, plot devices, and underlying themes are very much connected to the ideals of the creator, stemming all the way back to the ideals of her parents and how they themselves were shaped by the memory of the war. As suggested by Yoshitaka Mori, a writer studying Japanese Neo Pop, anti-war sentiment and nationalist sentiment became much more prevalent in pop culture, in the years following the war.[2]

Perhaps the most well-known example of Japanese nationalism themes used in cinema is Ishiro Honda’s film Godzilla (Honda, 1954). The sea monster, Godzilla, born from a nuclear explosion, is an allusion to America’s use of atomic weapons on Japan. In the film, Tokyo is ravaged by the atomic monster, but the hero, Serizawa Daisuke, is able to destroy Godzilla at the expense of his own life. Serizawa even destroys the blueprints to his weapons, so that no one can ever use them for evil. To this end, he uses weapons (symbols of human ingenuity and thirst for destruction) for the sake of restoring peace. This honorable death is akin to the fighting dogma of ancient Japanese samurai, rekindling the country’s faith in its own national identity.

Japanese Neo Pop artist Murakami Takashi states that, “The fact that we faced the end of the war by the dropping of atomic bombs is very symbolic and influential, not only for people who experienced the war but also for my generation who didn’t. In a sense, the Japanese have the principle of living for the moment.”[3] The events that transpired over the course of the Second World War have had quite a profound and lasting effect on Japanese pop culture, and the memories of those events still resonate in the minds of the generations to come.

Next time, we’ll take a look at some of Hayao Miyazaki’s works, in which these themes are echoed for a future generation and an international audience.

One response to “Discussion – Following the Fallout: The Impact of World War II on Japanese Popular Culture”