Well, this series ended in a way that I expected. The powers were over the top, the girls all fought together, and the guys in the organization raised far more questions than they answered. Overall, I did not like the ending, but that is because I don’t like the cheesy bullshit that this series pulls. If you like it, then you probably enjoyed this last episode.

The swan songs no longer affect anyone apparently.

The episode went in a very standard way. Hibiki scared Dr. Ver and he ran off in an attempt to take the world with him. Mad scientists tend to do that. While The commander and company went after the doctor, Hibiki and the rest of the Diva’s had to go after the Nephilim’s heart. After a fight that required the aid of Shirabe, Kirika, and Maria with a new relic, the girls all transformed. The new friends became far more angelic, but they were not the only ones that gained new powers. The Nephilim absorbed the frontier and turned into something that looked a lot like the fire spirit from Shaman King. The only way to stop it from vaporizing the Earth was to defeat it before it went critical. Of course, a very convenient course of action was taken. Make a giant gate into the Noise world with Solomon’s Cane and throw the thing inside of that. It took Maria with it, but the other girls followed after the two. A fight that can barely be called a fight happened and they all escaped. The Noise world was sealed off as Miku used some kind of herculean strength to throw Solomon’s Cane into the portal and it looks like all of the Noise died. The world seems safe and there doesn’t seem to be a sign of another season in the near future. 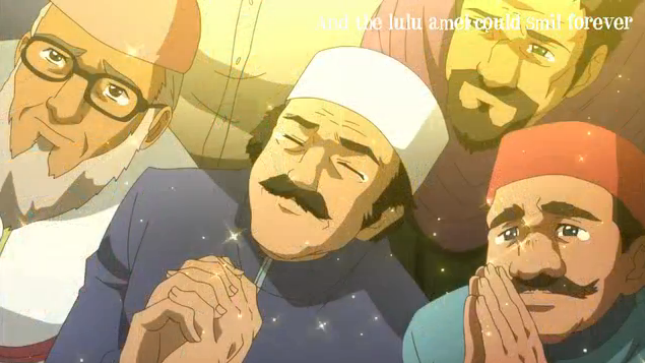 This may be the greatest anime screenshot of all time.

I was not a fan of a lot of the things that happened towards the end of this series. I will get the negative stuff out-of-the-way so that I can focus on the positive at the end. First off, that spirit bomb like song stuff was pretty ridiculous. Did everyone suddenly believe in some little girls? I think the picture above this section illustrates how ridiculous that was. Also, I am tired of everyone becoming friends in the end. No one was evil, so we only have to hate Dr. Ver. You can’t have a series full of heroes. Dr. Ver is too much of a bitch and I never really felt like we had a true enemy. I hated the guy, but he is not a threat. Well, possibly the most aggravating thing about this episode may have simply been Miku’s olympic quality pass at the end of the episode. The girls can’t have the energy to close the gate? Miku throws like a professional quarterback? They couldn’t have opened a gate that was much closer to them and avoided all of the bullshit? It was too dramatic for its own good. 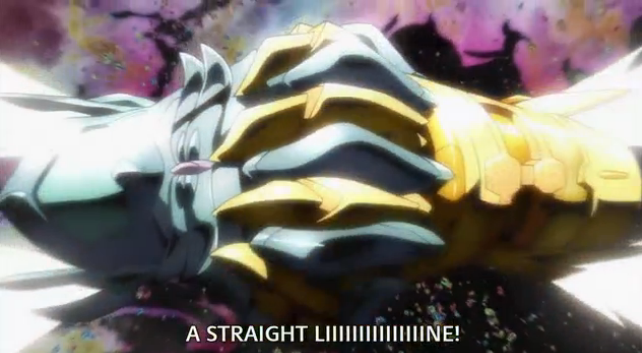 Where was this earlier?

If I liked anything about the ending, it was the ridiculous powers. I think that one of the most neglected parts of this series is the abilities that the divas use. The problem is that they used their angelic power to such a limited capacity that it was more of an aesthetic change than anything. I enjoyed the crazy shit like the megazord fists and Shirabe’s mech, but I wanted more of it. Once again, there never seemed to be a real threat in this series because you know that the girls will all be friends in the end. I know, I said that I would be more positive at this point in time, but I don’t think that I can. I am left with far too many frustrating questions right now. Why did they wait this long to show off the powers? Will we ever know about the commander? How did the producer guy become Shikamaru. That’s right. We knew that the commander was strong, but the producer guy curved a bullet like he was from that horrible movie “Wanted” and then he used it to bind Dr. Ver by his shadow. I am officially against another season of this series unless it gives us some answers. Having said that, I can’t imagine this series getting a third season. I say that because the Noise are gone and the moon is returning to normal. I don’t know what the story would be like after this.

We never got to explore this world.