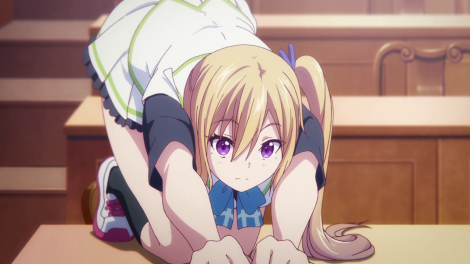 It both excites and surprises me that I can talk about Schrödinger’s Cat again on this site, with first instance being in episode 9 of Railgun S way back in 2013, and while the famous thought experiment has a more literal application in that series, it actually manages to have both a literal and philosophical role in Phantom World. As explained in this episode, Schrödinger’s Cat presents a morose analogy for the behavior of light in the realm of quantum physics, wherein light can behave as both a wave and a particle and will not adhere to one state until specifically observed. 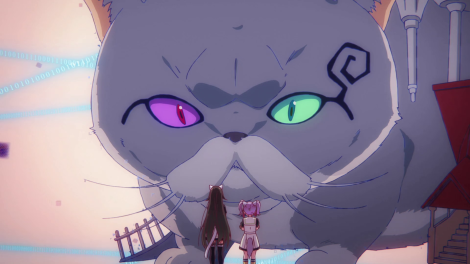 Schrödinger’s Cat ties in great on a literal level, with the Cat Mansion itself housing a myriad of mind-bending illusions all for the sake of companionship, and I love instances like this when normally inanimate objects are given human characteristics. It implies that loneliness and other concepts like ibasho (which I talked about for episode 4) aren’t really exclusive to humans, as weird as that may sound. We see this theme as early as the first episode with the power line Phantoms. that feel lost since they’re no longer being used and can’t return to being trees.

On an overarching level, Schrödinger’s Cat encapsulates the series’s focus on the idea of possibilities and scenarios made possible only with the help of Phantoms, and this point is especially salient when you consider that Phantoms are creations of the mind to begin with. Specifically, we see it in episode 4 where we explore life with Reina’s ideal family and again in episode 6, as the endless possibilities that spawn from Kurumi’s imagination give her the courage to find strength from within. This is hands-down my favorite episode of the series, and it’s not just because of all of the cats and the ensuing feline chaos (though let’s be honest, that’s the biggest reason).

Also, as a quick post-script, I’d like to praise the cinematography, achieving Shaft level of excellence with the framing of its shots that marry well with theme of the episode.

“It may look normal, but there may be many uncertain things inside.” ~ Haruhiko Ichijou