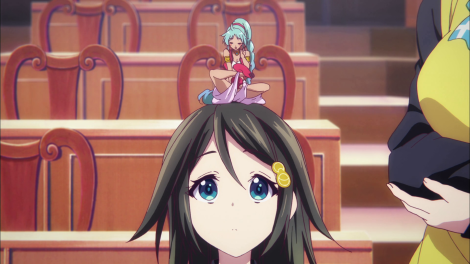 If I had to pick a favorite word in Japanese, it would be 居場所 (“ibasho”). It means “a place where you can feel like yourself,” and I love it because there is no single word equivalent in the English language for such a salient philosophical theme. Beyond other more material aspirations in life such as achieving financial success or, to a certain extent, falling in love, finding one’s ibasho is, to me, the secret to finding happiness during the brief time we all have on this floating rock in space. Sadness, loneliness, and depression are all mental states that form when you cannot find an ibasho, whether it’s because you don’t get along with your parents or have trouble making friends or whatever the reason. 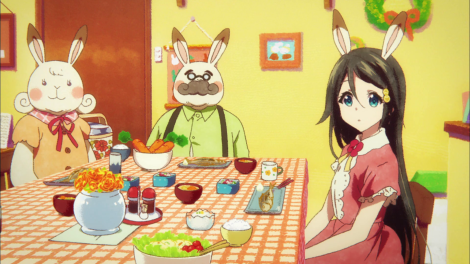 An ibasho is such a precious thing, especially for those who have trouble connecting with others, and I can’t imagine what it’s like to actively give one up. That’s why this episode of Phantom World hit me particularly hard, even though this entire development with Reina and her parents is almost nearly self-contained in this one episode. This is in spite of the usual entertaining atmosphere that we have too, and I think the fun attitude depicted this episode, with the cute bunnies, watercolor filter, and over-the-top silly behavior caused by the Phantom’s illusion helps the underlying, serious story beats resonate that much stronger.

Even though they’re goofy caricatures, even though we never really meet her true parents, and even though the entire scenario is presented with an irreverent air, seeing Reina say goodbye to her rabbit parents is emotional. Reina had, for however short of a time, an ibasho, and so did the rabbits, as they express how much fun they had being Reina’s surrogate parents. At the end of the episode, we see the shards of the stone pillars that represented the rabbits at the entrance to Reina’s real home, subtly signifying character growth that I’m sure many people would not have expected out of this series from the first episode.

If there’s one thing to take from this episode, it’s that there’s no such thing as a “fake family” in an ibasho. 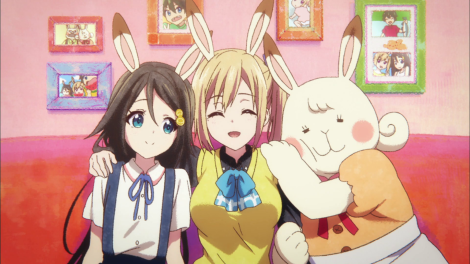 “It was only for a short while, but it was fun being your family.”