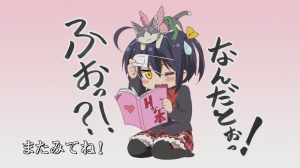 Well, for those of you that doubted the power of Yuuta and Rikka’s relationship, we have episode seven. I was a little disappointed with the fact that Yuuta was not the only person that was invited to go along on the trip to see Rikka’s family, but the episode was still good. We get our almost necessary beach episode that was heavy on the fan service, but we did have a serious aspect floating around. It is revealed that Rikka’s father is dead and that Rikka has a strained relationship with the rest of her family. Part of Rikka’s attachment to this world of make-believe stems from her inability to accept the death of her father and she seeks a world where he is still alive. Yuuta makes a run for it with Rikka to go and see the house where she grew up only to find an empty lot. Touka confronts the two and things get interesting. The serious themes that explain why people dive into fantasy worlds is something that I am really coming to enjoy in Chuunibyou and it is helping the serious separate itself from your average slice of life anime. 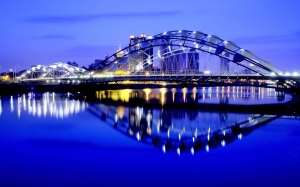 The lights are beautiful.

Chuunibyou is becoming one of my favorite series from this season. Anyone who enjoys the relationship between Yuuta and Rikka will love this episode because I know that I did. With the beautiful animation and the mix of drama and humor, this show will appeal to a wide variety of people. I look forward to seeing how this vacation arc ends.