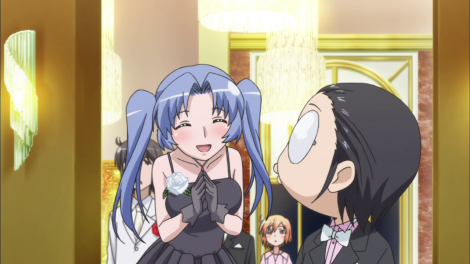 Phew, after the cliffhanger last week, this episode certainly does not disappoint. After Kotoura recovers from her fainting spell, she discovers that her ESP has returned and is what showed her those grisly images from before. She also learns that a string of attacks of female high school students has been going around the city. Connection, anyone? We’re introduced to a typical police duo made up of a hard-boiled veteran and a rather tall female rookie. Anyone who has played Persona 4 will immediately draw a connection from this type of character dynamic.

Rumors that Kotoura knows the identity of the perpetrator begin to circulate around the school after Moritani recklessly mentions the idea in class one day. This causes a wide backlash against Kotoura, placing false responsibility of the crimes on her shoulders. Mifune suggests that they cut the rumor problem at the root by simply finding out the person’s identity themselves. We’re starting to see things coming full circle, as now we have Kotoura in the hot seat for getting her powers involved in a crime investigation just as Mifune’s mother did. For Mifune, having Kotoura solve the case via ESP would bring vindication for her mother.

In hopes of bringing up Kotoura’s spirits, the club plus her grandfather go out to a fancy dinner at a nice hotel. Unfortunately, the night is interrupted by the surprise appearance of Kotoura’s mother as well as a mysterious man that gives Kotoura an immediately bad vibe. After much difficulty, she musters up the courage to tell her mother the one thing she wanted to the most: that she has friends now. This is like the sweetest thing ever, and it’s even a little hard to imagine what it’s like to be in her shoes because most of us take having friends for granted.

Naturally, her mother tells her that she’ll eventually drive them away like she always has. In a very cheesy yet impacting act, the club members back Kotoura up and promise to always stay by her side. Then, Manabe goes off another perverted rant, which actually prompts Kotoura’s mother to defend her daughter. Maybe there’s still some good in her? Moritani was absent from this soiree, having went off to settle the case herself because she felt responsible for the rumors. However, we’re left with the most ridiculous cliffhanger ever!

Being a fan of mysteries, I really enjoyed this episode. I’m really pleased with the depth that each character is getting. While not much backstory is being divulged, their actions and even their motivations still come through quite strong throughout each episode. Manabe’s boundless loyalty, Mifune’s conflicted past, Moritani’s sense of responsibility, Muroto’s wisdom, and Kotoura’s innocence; it’s all there.