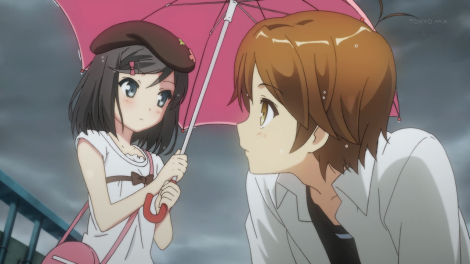 The pet-master antics continue in this week’s episode of Henneko. But in terms of who is the pet and who is the master, the lines get blurred. Youto waits on her hand and paw, but because of the release of his inhibitions it feels like he calls the shots in the relationship, with the curse bending Azusa’s facade to play the role of the master against her will. On a trip to an animal cafe (which actually has animals and kemonomimi maids) to get ideas, Tsukiko and Youto run into Azusa working part time. Despite her suppressed emotions, Tsukiko still shows hints of jealousy and feelings for Youto. Even though Youto’s a no-good pervert, he’s probably the only person who has shown physical interest in Tsukiko.

Youto asks Azusa to go on a date with him (so that he can hopefully extract her facade from her) and Tsukiko insists on joining them. They go to a variety of typical date spots like the obstetrician’s office and an arcade. Tsukiko shows off her prowess at the crane machine by winning an amalgam of snack foods and even a turtle plushie for Azusa. Things seem to be going well until Youto mentions that the two girls look like they’ve become sisters or friends. This statement hits them both differently, as it seems Tsukiko has issues with her sister (the scary Track Team president) and Azusa has had a bad history with her friends.

To make matters worse, Tsukiko and Youto get chased out of the arcade by her sister Tsukushi. Back inside, Azusa is confronted by her old “friends” from her old school, one of which is voiced by Aya Suzaki (Tamako Kitashirakawa) which is hilarious. They pick on her, which explains why she has trust issues with friends now. After Tsukiko and Youto seemingly abandoned her, she questions why Youto asked her on a date in the first place. Unable to lie, he confesses to an ulterior motive and Azusa runs away crying.

Despite its comedic overtones, Henneko is proving to have some depth in terms of its characters. The whole idea that each character is forced into a personality that is significantly different from his or her own is really interesting. We know how Tsukiko and Youto were before the curse, but we still don’t know about Azusa’s personality. What we can be certain about is her insecurities were driven by her experiences at her old school and caused her to make the wish to the cat, gaining her facade. What I’m wondering now is how many more times these personalities will change, if at all. We also a taste of the cute ED that features Tsukiko singing and dancing with her more animated alter-ego.