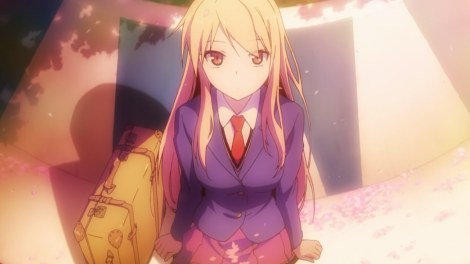 There exists a dorm where misfit students attending the Suimei High School of the Arts reside. That place is known as Sakurasou. Coming into this series, I had some understandably shaky hopes. The anime series adapts the light novels of the same name, which is always kind of scary because romcom light novels can be hit-or-miss in terms of fresh ideas. To make matters more dicey, J.C. Staff is the production studio and has a history of inconsistent quality. However, my hesitance was quickly cured after watching the first episode, and I found myself eagerly anticipating the next episode each week for half a year.

As a housing hall meant for misfits, the expectation for interesting characters is high. Luckily, the characters of Sakurasou fit the mold quite nicely, generating a lot of crazy predicaments for themselves. First, we have our protagonist Sorata Kanda (CV: Yoshitsugu Matsuoka), an aspiring game designer. He gets stuck at Sakurasou because of his habit of picking up stray cats, and the normal dorms don’t allow pets. Next, we have the more-than-eccentric Misaki Kamiigusa (CV: Natsumi Takamori), and the designated cool playboy Jin Mitaka (CV: Takahiro Sakurai). Then there’s the mysterious Akasaka Ryuunosuke (CV: Yui Horie), a genius who locks himself up in his room, and the hard-working Nanami Aoyama (CV: Mariko Nakatsu), a girl who has a crush on Sorata. Finally, we’re introduced to the titular “Pet Girl” named Mashiro Shiina (CV: Ai Kayano), who turns out to be an internationally-revered painter who has trouble taking care of herself.

Sorata is charged with taking care of Mashiro, who is strongly hinted to have a form autism because everyday tasks like getting dressed properly and comprehending emotions like love allude her. Much of the early series focuses on Sorata’s relationship with Mashiro, which more or less begins as that of a master and his unresponsive pet. But as the series progresses, pet gradually becomes human as Mashiro learns more about emotions and even develops her own feelings of what could possibly be love. Of course, I’m sure Nanami won’t take these advances lying down.

The group dynamic of unlikely friends, plus being produced by J.C. Staff, immediately made me think of Toradora!. Like Toradora!, Sakurasou turns out to be a romcom that eventually develops quite a bit of drama. However, the two handled said drama fairly differently. The biggest difference, I think, is that Sakurasou‘s dramatic moments feel awfully forced a lot of times, and much of it merely consists of Sorata yelling. I suppose that they were going for a realistic portrayal of teenage frustration towards life, but it gets grating after a while, losing the meaning and effect that it’s supposed to have.

I was pleased with the animation quality. Minor inconsistencies do happen (mostly with Mashiro’s eyes, for some reason), but on the whole everything is very pleasing to look at, and all of the characters look really nice. Although the BGM is nothing special, Sakurasou is one of the few anime series that has amazing OP’s and ED’s, and there are two each! They all perfectly fit the energy that the series and the characters continuously emit, though I do prefer the first OP and ED to the second ones. 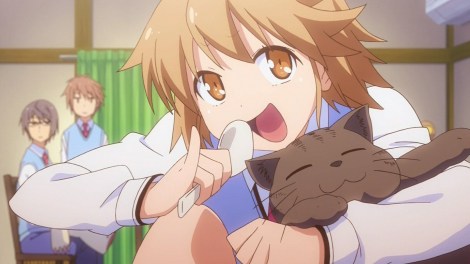 To say that Sakurasou is a journey would be an accurate description, I think. It may not be one of those where the characters band together to defeat the Demon King or anything, but it’s one that a lot more people can relate with. Of course, it’s not all dramatic realism and tormented anguish. There’s a whole lot of laughs to be had as well, and this is something that Sakurasou succeeds massively. To avoid being dragged down by a heavy atmosphere, anything serious is typically followed up by some ridiculous event. It’s really anyone’s guess as to what will happen with these kids, from Mashiro flooding the hallway with bathwater to Misaki breaking Sorata’s door down in order to take his pants off. It’s never a dull moment at Sakurasou, and that’s all the fun. The series even leaves the possibility for a second season, which would make me incredibly happy. That’s mostly because Sorata’s sister, Yuuko, is one of the funniest characters ever.

Wanting to make friends, fearing rejection, watching others succeed, and giving your all but getting nothing out of it. These are all places that we’ve been to or will visit at some point in our lives, and Sakurasou shows us one group’s trek through this rocky path. At the risk of being cliché, I suppose you could call that path “life,” and this group’s odyssey proves to be one of hardship, growing bonds, and wonderful colors.

Highly recommended for those who enjoy a great cast of characters, funny misunderstandings, heart-throbbing romance, and even a life lesson or two.

One response to “Review: Sakurasou no Pet na Kanojo”