I don’t know how Kodaka handles the Neighbor’s Club.

Just so you know, this is the sequel to Boku wa Tomodachi ga Sukunai from Media Factory. I do suggest that you check that out before this one, but that should not be an issue because it is only twelve episodes long, thirteen if you count episode zero. I actually had to request this series when it came down to our 2012-2013 Winter Anime Season Draft because I was not the only one that watched season one. Bryan is also a fan of the band of misfits from the only Catholic school that I have ever seen in an anime. I am a big fan of romantic comedies and this series seemed to separate itself from the average harem with its unique characters. Even though I enjoyed this group of outcasts, my biggest complaint regarding the first season of Boku wa Tomodachi ga Sukunai would be the lack of character development for people not named Kodaka or Sena. However, this series definitely decided to give some other characters their share of the spotlight.

I guess everyone wanted in on the fun.

Well, you and the band of misfits have been together for quite some time now. You haven’t really made much progress when it comes to making friends with normal people, but it is becoming very obvious that you are all starting to feel very comfortable around one another. Whether or not you decide to acknowledge it, there are friends all around you. The only kind of person that could be any more dense when it comes to this kind of thing would be the protagonist of a harem. Oh wait, we have one of those. We have already gone an entire season waiting for him to make a decision, but what happens after a choice is made? Can you really date a member of the club and not make things extremely awkward with everyone else? When will these people realize that the friends they desire are sitting next to them as we speak? I guess these are all really important issues. More so than any other harem, Boku wa Tomodachi ga Sukunai follows the growth of the various characters as in people in a not so romantic sense. Our story picks up where last season left off with the Neighbor’s Club continuing their activities. Obviously, the original purpose of the club has been lost somewhere along the way, but things never get to be that easy. Let’s see how lovable outcasts try to make friends and, more importantly, win the heart of pudding head himself.

Rika gets really important this time around.

Everyone from last season is back and we do get to meet a few new characters along the way. One of the biggest differences between seasons one and two of Boku wa Tomodachi ga Sukunai is the level of character development that takes place during the story. Season one gave us Kodaka and Sena. Both are nice characters, but you can’t throw out an entire harem of girls just to cast them aside from what you have established as the only possible winners in the series. Kodaka Hasegawa is the main character. The misunderstood young man has dirty blonde hair and an awkwardly angry demeanor that make people think that he is a delinquent. There isn’t an easy excuse for looking scary, but the dirty blonde hair is a result of being half white. It is pretty unfortunate that Kodaka is made out to be a thug because he is a very nice guy that excels at housework. Sena Kashiwazaki is the daughter of Kodaka’s father’s best friend. Sena is the top of the class in terms of grades, athletics, wealth, and overall aesthetic appeal. She has been described as a person that has won far too many genetic lotteries, which has led to some not so savory attention. The boys only want Sena for her body and the girls resent her for the attention that the guys give her. Even though she may seem popular, Sena can’t really trust those around her and this has led to a life of solitude. Her obsession with galge and gullible personality has persisted and we learn even more about her connection to Kodaka. Yozora Mikazuki is Kodaka’s childhood friend. The good thing about Yozora in this season is that she seems like much less of a bitch than before. Obviously, we still get the classic sadism towards Sena, but we learn more about her softer side as the series progresses. Rika Shiguma shows off more of her scientific prowess with new technology that really should exist by now. The fujoshi that can’t hold back around Kodaka gets to show off brand new sides of herself in a season that turns her into a main character. Yukimura, Kobato, and Maria don’t really see major personality changes in season two, but secrets about each of them get revealed. Some of them are shocking, while others are very much predictable. New characters that we get to see include Maria’s sister Kate who is a slovenly nun and various members of the student council. All of them take a liking to Kodaka, but that is a given.

Way to raise the bar to a point where I rethink my opinion of Boku wa Tomodachi ga Sukunai season one. Obviously, the art has changed and that is something that I am a big fan of. The changes weren’t drastic, but I think the refining of character designs was necessary. The minor issues that I had with the art in season one no longer exist in Next. On a much more important note, this season proved that you can develop all of the characters that you introduce in a series. I have a major issue with writers that introduce recurring characters that feel as irrelevant as the figures in the background of public scenes. Boku wa Tomodachi ga Sukunai Next not only developed all of their existing characters, but they did it in such a way that people end up on a level playing field. Each of the Neighbor’s Club members get their own episodes to star in and Rika even seems like a main character. Rika’s evolution in particular is something that should be applauded. All of that great character development, Kodaka’s interesting perception of the people around him, and the obvious choice being made at the end all really stuck with me. Don’t try to predict where this series is going between episodes because you will more than likely be wrong.

I am still a fan of Kodaka x Sena.

Talk about improving yourself. This series has grown up with the same ferocious pace as the characters that the story depicts. I can’t even begin to say enough about how the character development really pushed this series over the top. Quality writing can keep a shaky series afloat and push a successful series into the stars. Boku wa Tomodachi ga Sukunai Next is a great example of what a harem story should be like. Don’t just focus on a character’s connection to the main love interest. Why even introduce character’s if their story is dependent upon someone else? Give us something that will allow you to show more than one or two characters growing as people. Them emphasis on obtaining friends is something that everyone can be a part of. Losing the harem race no longer makes you a pointless character because you get to show real growth. The quality of this season should give newcomers even more reason to start this series. The ending basically said to wait for season three because the romantic closure was cut off short. I can’t wait to see the rest of this story. 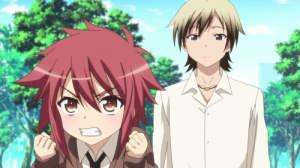 Aoi is my favorite new character.