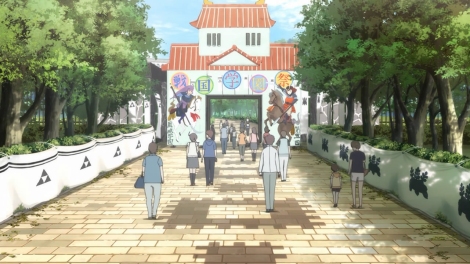 At last, the school festival is here!

There are big events going down at the school festival, and I don’t just mean the concession stands and exhibits. The conflict between Takayanagi and Mayura is once again heating up, and it looks like both sides want Izumiko. The conflict has been hinted at for the longest time, but we’ve never really seen much confrontation aside from the fight between Ricardo and Masumi. I just really wish the conflict would be brought out to the forefront more instead of being talked about all the time.

The episode did have some nice comedic bits, especially between Izumiko and Miyuki. It’s getting obvious that there’s a bit of romantic interest between the two, more obviously with Izumiko. She obviously hasn’t forgotten about the Goddess’s conversation with Miyuki, and while she’s scared of the implications it has on herself, she seems worried about what Miyuki thinks about the Goddess herself. It was really funny seeing her get jealous over Miyuki spending time with the Goddess. I guess she’s grown attached to him now.

I thought the mysteries surrounding the school festival would lead to something bigger. The scene in the haunted house was actually pretty sinister. Seeing the multitude of ghostly hands reaching for Izumiko seems straight out of a horror flick. Obviously something dark is happening on school grounds, and my best guess is that Takayanagi is behind it. After all, the school festival is supposed to be when he settles the score with Mayura, so he’s got something big in store. 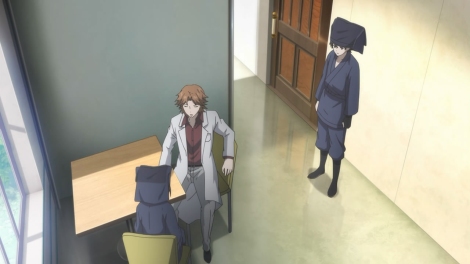 Some of the other plot threads were amusing, but unimportant. The unusually large amount of women checking into the nurse’s office? Turns out they’re all there to see Yukimasa. The man knows how to draw attention to himself. Then there was the plot thread with the middle school girls trying to get Izumiko to play the part of Princess in the parade. It doesn’t seem important at the moment, but who knows? Maybe it’ll play a bigger role in the upcoming battle.

I’m really hoping for spectacular to happen, and I hope that’s not an unreasonable request. The showdown between Mayura and Takayanagi is now set, and after being talked about all season, I really hope it pays off. The school festival seems like the perfect place for such a showdown to go down, after all. We still don’t know what Izumiko’s role will ultimately be, but there’s no doubt that she’ll end up right in the middle of it.