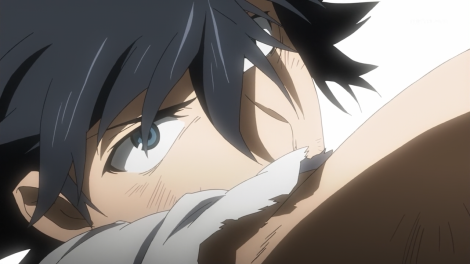 It’s the episode that we’ve all been waiting for: the final showdown with Accelerator. I was interested to see how J.C. Staff would handle reanimating this long anticipated fight scene, and I’m pleased for the most part. They did leave out some things which I personally think are pretty important, especially for the character development of both Accelerator and MISAKA 10032. I’m mostly referring to the conversation they have (in Index) prior to the 10032th experiment. This scene actually plays a significant part for Accelerator’s character at a later point in time, and I’m fairly surprised that they took it out.

The second thing I miss is the whole fight between Misaka Imouto and Accelerator, mostly because I thought her idea of catalyzing oxygen into ozone with her electric powers was really cool. A lot of why I like the Raildex series is because a lot of the scenarios have scientific explanations and backings to them to make them seem plausible, even if in reality they really aren’t. Still, all I really ask for in a series is to keep things plausible within the rules that they set for themselves.

This kind of brings me to one of the biggest burning questions that I have, which is about Touma’s Imagine Breaker and why he can’t use it to stop the objects that Accelerator fires at him. My first thought was since Accelerator simply changes their direction and velocity vectors, it doesn’t really count as being “supernatural” by the time it reaches Touma. However, this doesn’t explain why Touma can stop other things in Index like a building that’s collapsing because one of its floors is teleported away just by touching it.

Moreover, if espers create illusions with their powers, and Touma’s Imagine Breaker is meant to dispel said illusions then theoretically he should be able to stop any phenomenon that an esper (or magician) creates. This goes for the girders as well as the plasma that Accelerator uses. It’s because of this that I don’t really like Touma as a protagonist. His power is so perfect that there’s no tension or excitement in any of his fights. Because his power can (or at least should) negate everything, all of his fights are essentially carried out in the same manner.

As much as I don’t like Touma’s part in the fight, I did enjoy how they lengthened some parts like Misaka’s entire thought process throughout the scenes. They also put Accelerator’s power to control wind on a much bigger scale, which really added to the tension. I’m interested to see how they arrange the events of the next episode because isn’t much of the fight left. Also, that animation. It looks like a freaking movie.

One response to “Impression – Toaru Kagaku no Railgun S, Episode 15”