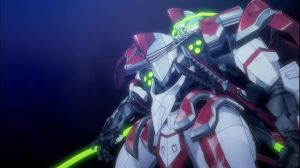 Aside from the fact that Yamada is a hot head, it was pretty obvious who the next pilots were going to be. Although we did get to see two new mechs join the fray, the best part about this episode is the fact that a lot of our questions were answered. There are still quite a few mysteries in this series, but let’s get to what happened in this episode. 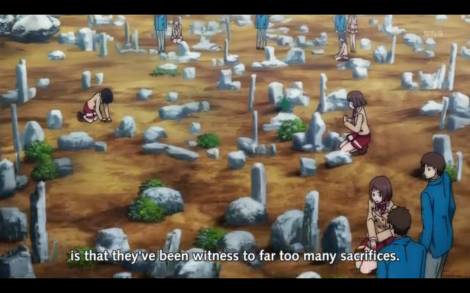 One of my biggest fears was that L-elf’s presence could be received in two very different ways. The first is that he is not welcomed by the students. This is bad because they need his strategic abilities in order to survive this war. On the other hand, it makes a lot of sense. This direction would be good because it would feel like a natural reaction by the student. The guy was a part of the army that is trying to kill you and your families. His strategies are so great that you could believe it was impossible for him to come up with such plans without having inside information that a spy would have. The other direction to take is the acceptance one. I feared this because it would seem very unnatural to have everyone welcome this guy for the reasons that I previously stated. However, the writers took this direction and spun it in a way that I found to be acceptable. People accepted L-elf’s help because they were tired of watching their friends die. They were looking for strength and they trust Haruto the Hero. His endorsement probably meant a lot. That, and the fact that his first move saved their asses. 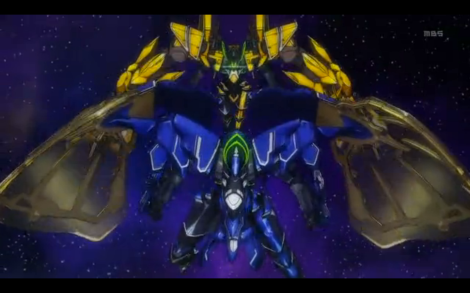 They really want the mechs to have different colors.

The biggest part of this episode was the military strategies that were implemented. Since L-elf has been welcomed as a refugee, the students have all been participating in basic training. First aid, field combat, strategic work, everyone has been given their roles. Let’s go over some of the cool things that have gone down. The Queen and her crew have been put in charge of handling strategic defenses. There is a magnetic field around the module that is used to deflect space debris. L-elf has put the girls in charge of using it in order to deflect enemy attacks. Saki and Haruto are obviously in charge of space combat, but they aren’t the only ones that are shooting people down. Some of the students are manning turrets, but all of this takes its toll on the energy reserves that are at a minimum now that the module is independent. The group was put into a bind and this forced Yamada and Inuzuka to take action. The both jumped into Valvraves. Yamada is piloting the yellow mech. It uses multiple arms and canons to fire guns. The eight arms form two claws at rest which are used for melee combat. Inuzuka is in the blue one that sees to specialize in defense. Two wings on the Valvrave can stop even heavy artillery and its main weapons are two guns that fire a spread-shot. Although L-elf promised Haruto that no one else would pilot the mechs, these two did this of their own free will. Fighting aside, we learned some interesting things about the Valvraves that really shake up the plot. Mech reproduction, military societies, and the hunger of the beast have raised quite a few questions. 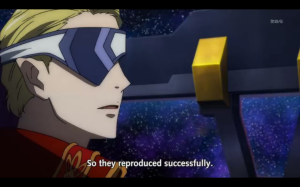 I am really enjoying what this series is doing. The mechs continue to be very unique. You can say that Sunrise has given us Gundams that were very different from one another, but I think that really depends on the series. I like the fact that all of the Valvraves play different strategic roles that L-elf will obviously use. Also, getting the entire student body on board is the best course of action. I just want to know how the student council president feels about all of this. I don’t recall seeing him at all during this episode and that could be bad. I hope that they bring him back because I think he could play a very important role when it comes to unrest amongst the people. Aside from that, there are three other serious things to think about. The first is the fact that Cain says the Valvraves are reproducing. It would not surprise me if the mechs were organic to an extent. Next, you have the fact that Haruto’s urges are getting out of control. They even showed the girl on his console saying “hungry” when that happened. The vampire thing may actually require the pilots to feed on blood. Why? I actually think that it has to do with their longevity. Being immortal probably requires a lot of energy that you just can’t get from bean jelly. Finally, you have the fact that the entire module was meant for the Valvraves. The entire staff, besides Nanami-sensei, were part of the military. This is not just some sick experiment because the students work a little too well under this wartime pressure. Too many students show signs of being good pilots and this series likes to explain what they are doing. I hope that they explain this pretty soon. 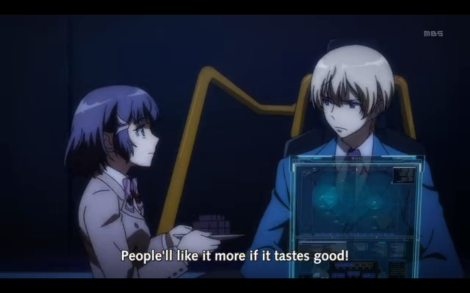 This series decided to take itself less seriously again. However, I did not hate it like I did with the singing. Module 77 is moving to the moon because it is a neutral territory and Inuzuka is talking about tourism. Why do I not hate this crazy idea? The module needs revenue and tourism is a very big part of a city’s economy. Also, morale would be far too low if L-elf turned the place into another Dorssia. Overall, I am enjoying everything that I am seeing and I am definitely looking forward to the last pilot being revealed. 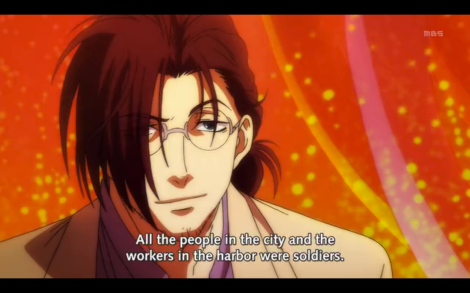