In this episode of Dragon Ball Z (at least that’s what it feels like with all of the cliffhangers lately), we find out that Moritani has been arrested for being at the latest scene in the recent string of attacks! The club breaks in to defend her, even though she isn’t in all that much danger. Kotoura uses her ESP to prove to the detective duo that she’s telling the truth about knowing who the culprit is. It turns out that the older detective actually knew Mifune’s mother and says that the police team basically had no other choice but to turn a blind eye when she got accused of being a fraud. He was even part of the team that discovered her dead body, along with a young Mifune.

With Moritani in jail, this creates a greater impetus for the group to go out and track down the culprit themselves. Surprisingly, Manabe is the one who puts his foot down and says that he is against the idea. His reason is that he doesn’t want to see Kotoura hurt again, after what happened the first time she encountered the perp. This leads to an argument that eventually causes Manabe to stop showing up the ESP Society meetings. Kotoura also goes off, leaving a sentimental moment between the two original members of the club. 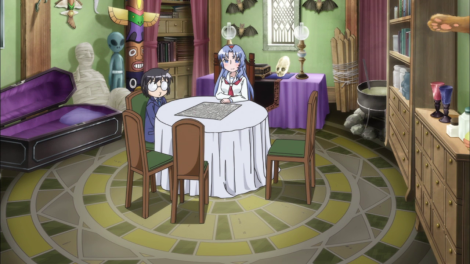 I’m liking the dynamic that Mifune and Muroto have going on. They’re childhood friends, so he knows her like the back of his hand. Even if he doesn’t like the way she’s going about regaining her mother’s honor, he says he’ll neither agree nor disagree with her. That level of faith, trust, and friendship is pretty cool, I must admit.

Eventually, Moritani gets released and Tsukino (the young detective) advises Kotoura to stop going after the culprit, for her own safety. Sounds like good intentions, but I’m getting a bad vibe from her. Kotoura forgoes this advice because she knows how important this case is for Mifune. However, Mifune decides to dangerously act as live bait to flush out the culprit, leading to yet another cliffhanger! ARGH.