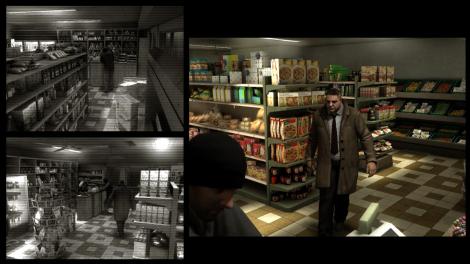 The term “cinematic” has been thrown around the gaming industry for years now. With gamers craving immersive experiences and the technology getting more advanced, a lot of developers seem to be pushing towards a “cinematic” aesthetic. Games like Metal Gear Solid and Halo have been pushing the boundary between game and movie for years through extensive cutscenes that flesh out story content. Even recent examples like L.A. Noire and Uncharted have pushed that boundary thanks to mo-cap tech and dynamic camera angles. One game in particular seems to always pop up when discussing cinematic games, and that is Quantic Dream’s 2008 title Heavy Rain, released exclusively for the PS3.

Heavy Rain is not a game in the traditional sense. When you’re not watching the story advance through cutscenes, you control one of four protagonists as they interact with the environment around them. Gameplay involves a lot of quicktime events where you hit buttons in a specific sequence and interacting with your surroundings with context-sensitive controls. That’s how everything in this game progresses: hit the buttons it tells you to, and you advance in the story. Failing the hit the correct buttons doesn’t actual make you lose and start over, but it does affect how the scene and ultimately the story pans out.

This means that you really need to pay attention to what you’re pressing, especially during action sequences. In one sequence, you have to drive down the highway against traffic at high speed. Button prompts pop up on the screen telling you which buttons to press and which direction to move the joystick. Miss too many button prompts and your character will end up severely injured in the next scene, and possibly without a vital piece of information. Games like this bring out the perfectionist in me, so I ended up repeating a few sequences several times to get all of the correct buttons. Despite the simplicity of the game mechanics, it really manages to keep you on your toes once the action heats up and forces you to pay attention to what’s happening at all times. 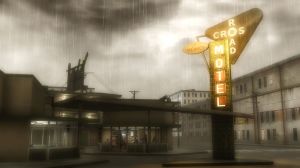 The game takes a lot of cues from classic film noir. Like the title implies, the game takes place over the course of one week during one of the heaviest downpours of the season. Which means, it’s constantly raining in the city, a common trademark of noir. Given the gloomy atmosphere of the plot, it’s fitting that something associated with sadness and loneliness is given emphasis to really set the tone. The soundtrack further evokes the noir feel with somber tracks that mainly feature strings and a piano. The art direction really nailed the feeling of melancholy, and the soundtrack reinforces the idea that things are not going to be happy.

I thought the characters (at least the main four), were very interesting. You switch perspectives every time you advance to the next chapter, allowing you to see the plot progress from four different points of view. So while one character is one side of town navigating a death trap, another character on the other side of town is investigating leads to try and help the previous character. While the characters don’t know each other at first, they cross paths several times throughout the plot and can actually influence each other’s actions depending on how successful the player is at guiding each of them through their respective chapters. So if you end up getting one of the characters killed, a character in the next chapter might have a bit more trouble than if that character hadn’t died. It adds weight to your actions and allows the gamer to influence just how the story will branch out into one of its many endings.

A major theme of Heavy Rain has to do with family, or rather the lack of one. It wouldn’t be a film noir if the characters weren’t lonely individuals, now would it? The main character is Ethan, a father who’s family is split in half after a tragic accident in the game’s prologue. His story arc is what drives the plot forward and eventually brings the four main characters together by the end. Forced by a mysterious killer to play a dangerous game in order to save his son, Ethan is constantly pushed to his limits. While the other characters are motivated to catch the killer before he claims another victim, Ethan’s story resonates the strongest.

This game isn’t without it’s share of faults. There are times, especially in the first couple of hours, where things are excruciatingly slow paced. Some of the early sections of the game involve a lot of walking or doing menial tasks. I understand that it helps to establish the relationships between the characters, especially Ethan and his son, and it’s a good place to practice button prompts for later. But it would be great to be able to move quickly from one place to another rather than walking around at a leisurely place. Finally, while the game is supposed to be set in America, French actors were brought in to portray the characters. It works for the most part, but their accents have a habit of slipping, which can be extremely distracting and often hilarious. It kind of ruins it especially during the more serious scenes.

Heavy Rain really set the bar for cinematic storytelling in video games. It really blurs the lines between game and movie and draws you into a immersive experience that few games have been capable of. The film noir atmosphere is a great fit for the game and the story can really keep you wanting more. The pacing can be slow and the acting may be a bit lacking, but it’s a great experience in interactive storytelling where your every action can influence just how the story ends. It’s a special privilege in the art of storytelling that you can only get from video games.

– Pacing can be SLOW at times

– Uneven voice performances can get distracting once you notice it