After nearly 13 years, Mike and Sully are back in Monsters University, the prequel to 2001’s Monsters Inc. This time, we follow the pair through their early years in college, and we get to see just how they become close friends. So how does Pixar’s latest fare? 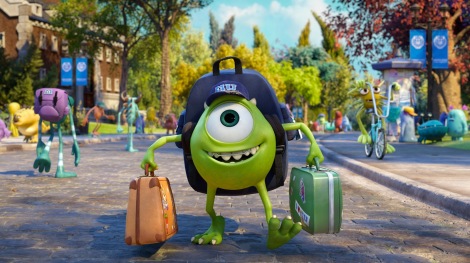 Don’t be alarmed, but I have never finished the original Monsters Inc. I have seen it in parts,  at various parties, on ABC Family, and even while waiting for the doctor. But I’ve never actually sat down to watch it from beginning to end. It seems to be a problem that when I was younger I wasn’t able to finish a lot of movies, some of which are critically acclaimed and loved by many today. For instance, I had a similar problem in that I never got to see The Incredibles from start to finish until several months ago when my friends finally sat me down with a copy of the movie and we watched it together. In fact, in addition to Monsters Inc, I haven’t finished Finding Nemo either, due to the same circumstances (saw it in parts, never owned it, short attention span), and whenever I say that out loud I always hear a few gasps in the room.

However, not seeing the original Monsters Inc. may be a blessing in disguise, because I get to see the film in an entirely different light from most other moviegoers. While most audiences will be familiar with the characters of Mike and Sully and with the world that they inhabit, I am vaguely aware of these things based on what I can remember from my limited memory. (The original came out 12 years ago, so spoilers are free-reign and I know how things go down). So while everyone is gushing over seeing these characters again for the first time in over a decade, I’m able to look at this objectively and see the development of our main duo without any preconceptions of their character in their later years. Because that’s exactly what this prequel sets out to do: to show how two misfit monsters managed to overcome their differences and establish a life-changing friendship that carries into their later years. 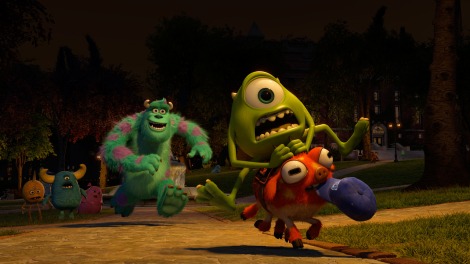 The movie follows a teenage Mike Wazowski, who enters Monsters University as a freshman in order to pursue his dream of becoming a Scarer. It’s here that he meets James P. “Sully” Sullivan for the first time and quickly establishes a rivalry with him. They both enter the prestigious “Scare Program” as majors, where only the scariest monsters will go on to work for one of the many scare factories in their world. After a mishap gets the two kicked out of the program, Mike and Sully hatch a plan to reenter the program by competing in the annual Scare Games, a series of challenges that test a monster’s ability to scare. They join a fraternity of misfits and together learn the values of friendship and such.

Both Billy Crystal and John Goodman have perfectly settled into their roles as Mike and Sully respectively. When we see them in the first movie, they have been friends for a number of years and have experience working in the scare factories. Here, their teenage counterparts are still very unsure of themselves and actually start out bitter toward each other. Mike is portrayed as a bookish overachiever who is constantly told by everyone all his life that he isn’t scary. This leads to his “Do or Die” mentality of never giving up on his dreams. Sully on the other hand comes from a background of well-known scarers, the Sullivan family. In return, he is extremely arrogant about himself and believes that he can coast through life just on his family’s reputation alone. As you can imagine, the clash of personalities isn’t so pleasant at first. But what’s wonderful is seeing their gradual friendship form through the course of the movie, and it works thanks to the performances. Billy Crystal and John Goodman manage to capture what it feels to be unsure about oneself, and it gives the characters a very human (ahem) quality to them. 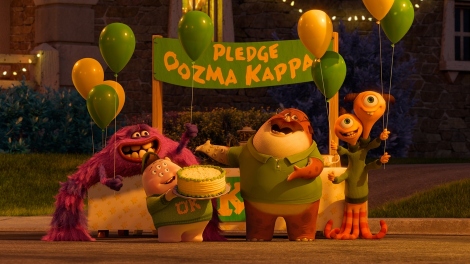 The supporting cast is just as fun to watch. Joining Mike and Sully in the Oozma Kappa Fraternity are Don Carlton (Joel Murray), Terry and Terri Perry (Dave Foley/Sean Hayes), Scott “Squishy” Squibbles (Peter Sohn), and Art (Charlie Day). All of them are outcasts within the university and are deemed to be unfit for scaring. It’s with this unusual group that Mike and Sully find comfort, as they can relate to their circumstances as well. The strict Dean Hardscrabble (Helen Mirren) is delightful as the truly frightening Headmaster of Monsters University, and there is a certain acidity in her voice that gives her every word a heavy meaning. One character is really wished they explored more is Randall “Randy” Boggs, who we all know as the villainous chameleon from the first movie. Here we’re introduced to him as a nerdy outcast similar to Mike. Throughout the movie we see him slowly undergo a personality shift into the Randy we’re familiar with, but it isn’t explored very much and most of that occurs off-screen. Of course we all know that he’ll eventually turn over to that dark side, but I really wish he had more screen time so we could sympathize with him a bit more and see just why he becomes the Randy we see in the future.

One of the problems I had with this movie is just how much they condense so much. There are quite a number of montage sequences that I noticed. The months leading up to the final exam are condensed into a short sequence as we go back forth between Mike and Sully to see how they prepare. A later sequence shows the two, after joining the Scare Games, struggling to train their team to become better at scaring. Even the Scare Games itself are condensed into a montage, and we only get to see a few of the games played out themselves. I get it, it’s a kids movie and if they spend time to show each and every thing, this movie could go on into the 3 hour mark. But at a little over 90 mins, I really wish they could go a little more in-depth with some of these events. The Scare Games are supposed to be a big event, so I really wanted to see it play out and see Oozma Kappa on their uphill battle through each one. It’s a bit of a minor complaint, but one that I wish could’ve seen more screen time. It would’ve also been a great way to show Randy’s development a bit more. 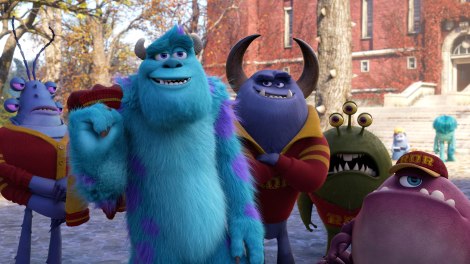 At it’s core, Monsters University is about the struggles of trying to find your place in the world and come to terms with the kind of person that you are. What better place to tell this kind of story than in a university setting? College seems to be that time where people go to achieve their lifelong goals. Up to this point, Mike has spent his whole life being told that he isn’t scary. Trying to compensate for that, he studies harder than any one else in order to learn everything there is to know about scaring. In contrast, Sully spends his whole life using his family’s name to get what he wants, without having to work hard for anything. While both want to become Scarers, deep down they are just as scared as the kids they’re supposed to be scaring. In the face of monumental pressure from their peers and society, they have to come to terms with their limitations and to the best that they can. That’s exactly why their friendship works so well. They help balance each others strengths and weakness, and in doing so they obtain that confidence that they’ve been lacking. I’m sure that feeling of uneasiness can relate to a lot of college students out there (myself included), and it’s that central message that works with this movie.

Even if you’re someone like me who hasn’t watched Monsters Inc, there’s something in this movie for everyone. It’s got characters that are fun to watch, great humor all around, amazing visuals, and surprisingly deep themes about growing up. That’s why I love what Pixar does with their stories. Even with all of the goofy things going on, it still finds a way to have a deeper meaningful message at the heart of the movie that drives its characters forward. For a character to develop in a well written story, they have to undergo some kind of transformation that will either ruin them or allow them to mature, just like growing up. And as we get older, that’s when we start to see the kind of person we will grow up to be. It seems to be some kind of underlying philosophy at Pixar, and it’s apparent in each of their stories. While this particular story isn’t the most original and doesn’t fully recapture the magic of the first movie, Monsters University is a solid movie in its own right that may be one of the more enjoyable feel good movies of the summer. At least, maybe until Despicable Me 2 comes out… 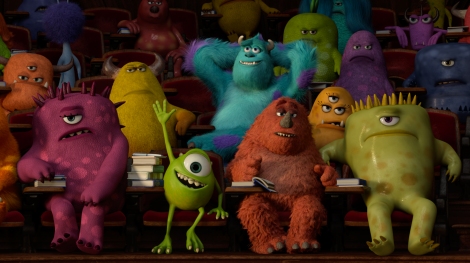 One response to “Review – Monsters University”