We’re at the final destination…

Hello everyone!  With this week’s episode, we have finally reached the epic conclusion of Devil Survivor 2 the Animation.  We continue with a final showdown between Hibiki and Hotsuin, as they firmly exclaim their reasons for fighting.  While Byakko and Cerberus are fighting to the death, their masters are standing by to debate the characteristics that define living or being human.  The two begin to get a tad emotional, as Hibiki claims that Hotsuin is not only human, but also a friend.  Hotsuin appears to accept such claims, but decides to continue fighting for his pride and honor.  A surprise that I enjoyed was Hotsuin’s sudden use of the game’s demon fusion mechanic.  I honestly thought they wouldn’t bother touching demon fusions, since they ignored the feature for such a long time.  Hotsuin pulls out all of the stops and summons the creepy SMT version of Satan to halt Hibiki in his tracks. 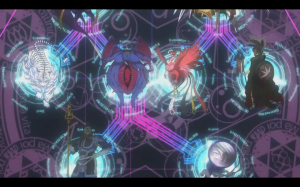 This was a nice surprise. XD…I need to check if this fusion is really accurate later.

Hibiki’s dragon powers are easily annihilated by Satan and leave him defenseless for the final blow.  By some miracle, Jack Frost (Black Frost) summons itself to protect Hibiki.  It appears that Hibiki has inherited not only the hopes of all of his fallen comrades, but also their signature demons.  With all of his friends’ demons, Hibiki manages to fuse Lucifer to fight Hotsuin on even grounds.  The two powerful beings clash and the battle ends with Hibiki embracing a dying Hotsuin (as his body has reached its limit).  Hibiki cries for a bit before declaring his wish to the descending Polaris.  Although we didn’t get to hear his wish immediately, the next half of the episode clearly shows that he wanted a reset to the time before the trial.  We see Hibiki and Daichi going through the same events as the first episode, but things change as soon as they meet Io.  To insure that Polaris didn’t implement an absolute reset, where the trial would be bound to occur again, Nicaea is shown to be a joke site now. Despite all of the events of the trial being erased, Hibiki begins to cry after talking to Io, as he finally remembered everything that happened.  As he realizes that his wish meant that he had to bring forth change to prevent another trial by Polaris, he rushes off to see if his dear friend, Hotsuin, was brought back to the world as well.  Along the way to the Diet Building, we are shown that all of the other party members are alive and well.  Finally, Hibiki arrives at the building and bursts into tears after seeing that Hotsuin is also alive….and has a scar on his face and clearly remembers the events of the trial.  Alcor then briefly reflects on his role being complete and engages in a monologue on the meaning of living before the episode ends.

This was funny…but how does Nicaea still know how he looks? Shouldn’t the gang wonder this?

This ending was decent and fitting for the entire series.  The idea of everything being reset was predictable with the massive amount of deaths in the later episodes.  Although Hibiki did quite a lot of crying in this episode, I wasn’t too bothered by it.  The scenes depicting the revival and well-being of all of the party members was enough to satisfy me.  Also, I must give credit to the cool background during the final fight.  The gradually changing space scenery and the sudden burst of gears everywhere was interesting.  The demon fusion scenes also looked very nice and flashy.  They probably made the last fight as flashy as possible for their budget, which is reasonable and somewhat expected.  What bothered me about this episode was the heavy emphasis on Hibiki and Hotsuin being friends.  While it was true that Hotsuin once risked his own life to save Hibiki, it didn’t make up for his willingness to kill everyone off to get the future he desired.  I felt it was a bit awkward how they tried to suddenly change Hotsuin into a slightly more forgivable character at the last second.  If they had given the series more than thirteen episodes and included the Fate events, then the character development and relations would have been much better.  Regardless, this episode provided a decent ending and the series was good overall.  I’ll be sure to go over my thoughts on the series as a whole in the Devil Survivor 2 the Animation review, which I’ll do soon…so look out for that.  Until then, let’s continue living! (Like everyone in the end).

Maybe too much crying happened…

Oh well! The gang is back together! ;D