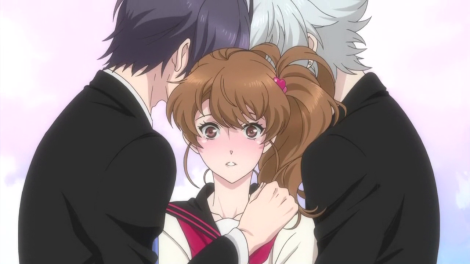 For the second time this year, I end up being the only one covering an anime based on an otome game. Boy was this fun for me.

Now before I continue, I want to make it clear, I have nothing personal against reverse-harems. In a market where there are already so many harem stories featuring a guy surrounded by girls who are all inexplicably attracted to him, it’s only natural that the opposite would exist. I think I’m actually getting tired of harem shows, since most of them tend to either A) throw plot and character development completely out the window in favor of panties and boobs, B) have romantic subplots that go absolutely nowhere (I’m looking at you, Hayate no Gotoku), or C) go for the nice boat ending.

So what is a reverse harem like? From what I’ve seen so far, it usually involves aplain average girl who are surrounded by inexplicably attractive men, and who are all ready to devote their heart and soul to her. The romance tends to be more on the pure side as well with little indication of sexual desire, according to the female gaze presented to us. But to me that makes it just as unrealistic as if a group of women suddenly want to give their bodies to the male protagonist, because it just seems unnatural. 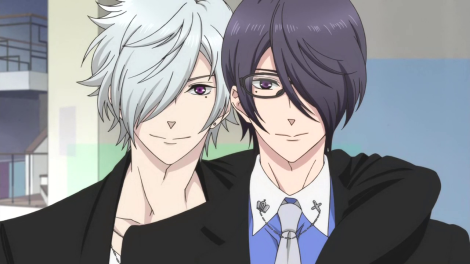 Not only that, the guys all look like they just went shopping at the same place Final Fantasy characters go to. I have no knowledge of the current fashion trends in Japan today, but some of these look pretty ridiculous. There’s even a guy walking around the house in a priest outfit, in order to beat into our heads that this is his occupation in life. I guess this is a teenage girl’s idea of an attractive anime male, but to have all 13 brothers be attractive and successful on some degree is crazy. Their parents must be gods or something. It’s even weirder when you realize that their parents conceived 13 children and not a single one is a female.

With so many men to choose from, it falls on the role of the female protagonist to really hook the viewer in and make them care about what’s happening. After all, she’s at the center of this weird messed up harem and we see everything from her perspective. But like with AMNESIA, Brain Base’s adaptation of another otome game earlier this year, our heroine Ema is extremely lacking in personality. We get a very vague idea of her background, but aside from that she doesn’t really stick out in this household. It’s a problem stemming from copy-pasting the player character from the game into an anime, who has very little personality to begin with.

Here’s my biggest gripe about this show: it’s about a girl becoming romantically involved with her stepbrothers. I have no idea why certain people within Japan have this fascination with forbidden romances like this. The most successful one in the mainstream so far has been OreImo, which is basically about the sexual tension between a guy and his younger sister. I guess I’ll never understand this, especially since I don’t have a sister (thanks Bryan), but it’s just really weird to me. To see a situation where a girl moves into a new home and immediately starts getting hit on by her stepbrothers sounds like a nightmare to me, not a romantic day dream.

And that’s why I will not be covering this show. Too incesty, too boring, and not giving me good impressions of otome games in general.

(Below are some of my random comments during my viewing)

“I still can’t wrap my head around the fact that she has a talking squirrel.”

“Rabbit? Ferret? What the fuck is that?” 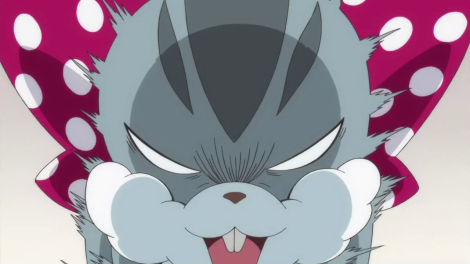 “This girl has no defining characteristics, other than that her all her stepbrothers want to bang her.”

“Shit, even the squirrel thing has more personality than her.”

“What bothers me is that half these guys are in their 20s. With stable and successful careers”

“Shouldn’t they be out living on their own at this point?”

“Should big brother sleep with you?” CALL THE COPS.

“…and he just kissed his new step sister on the cheek. Awkward.”

“What the hell is up with half the guys wanting to sleep with her? It’s cute when you’re like 4, but when you’re teens and adults..”