That was director Guillermo del Toro’s own words when talking about Pacific Rim two years ago at Comic Con. The longer version of that statement was something along the lines of this:

I’ve been hotly anticipating this film for a long time. I would’ve skipped seeing Man of Steel, Star Trek Into Darkness, Iron Man 3, and This is the End if it meant watching it. Del Toro has become one of my favorite directors because of the immense passion he brings to his own films. He’s like a kid with a camera: everything you see on screen, whether it be giant robots, fantastical creatures, or ass-kicking demons, seems like something straight out of his imagination, and his enjoyment can be seen in every detail.

Which is why I was immensely excited when I first heard of Pacific Rim. I grew up watching mecha anime like Transformers, Voltron, and Gundam. It’s exciting to see enormous mechanized machines waging destructive battles against equally large foes in order to save humanity/the world/the girl. Enjoying sci-fi requires the ability to suspend belief and to just lose yourself in the pure excitement of the moment. 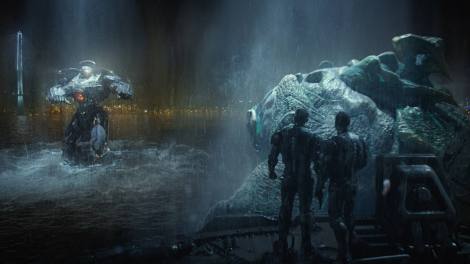 The world of Pacific Rim is one of ruin and hopelessness. In the near future, a portal underneath the Pacific Ocean allows monsters, called Kaiju, to emerge from another world. They immediately begin to destroy major cities around the world, with millions of lives being lost. In a desperate bid for survival, the world’s governments pool together their resources to build Jaegers, giant robots capable of fighting these monsters. After nearly a decade, humanity has its back against the wall as the Kaiju become stronger and most Jaeger units are destroyed.

What I’m very impressed with is the world-building in the film. The opening scenes quickly establish the kind of world this is, as it quickly becomes apparent just how much the world has been affected by the appearance of these monsters. It tries to show us what could happen if such a thing really happened in reality, and what would change as a result. Of course, no matter what the calamity, life does go on, and we get to see some glimpses of how the human race has adapted. The thing with the religious cults was interesting, but even more so was the idea of a Kaiju organ black market existing. It reminded me of the gang from District 9 making a profit from illegally harvested alien organs. Even in times of crisis, it seems there will always be someone ready to make a quick buck. 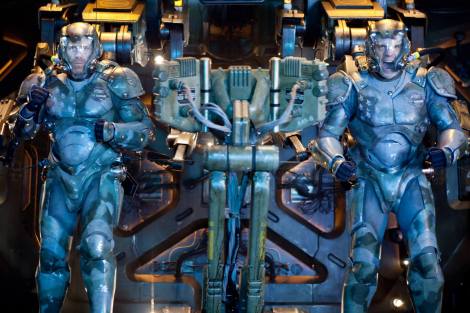 In Mike’s World War Z review, he talks about how that film was racially inbalanced by having a mostly-white cast while other minority races had underdeveloped roles. Del Toro wanted the cast of Pacific Rim to be multinational, rather than have one specific race for the core cast. He said in an interview that “The other sort of big summer movies often feel to me like it’s about one race, one credo and one country saving the world, and I wanted to make it about the world saving the world, no matter what skin color you have, what race you have, what belief you have.” And it makes sense considering the kind of world these characters inhabit. The entire human race is on the brink of extinction, so people from all over are doing their part to try and save it. I was afraid that the film would delve into stereotypes of Russian, Chinese, Australian, and Japanese people, but instead it gives them all equal ground and pretty much treats them all the same. In the end, they still come together to help each other when things get ugly, and it’s that theme of unity that flows throughout the narrative.

The side characters are worth mentioning because they’re just a memorable as the main cast of pilots. There’s a whole subplot following Charlie Day’s character as he tries to acquire a Kaiju brain in order to learn their secrets. He’s joined by an English scientist who can’t stand his off-kilter theories and mannerisms. They’re both so wildly different from each other, but their intentions and goals force them to overcome those and work together. Yet again it reflects on that theme of unity, because even though the two can’t stand each other, they manage to put aside those differences long enough to get their jobs done. It’s also worth noting that they’ve both got exceptionally well-written characters themselves, especially with Charlie Day bringing his special brand of outlandish behavior into this movie. He’s like if his Always Sunny character became a mad scientist. A special shoutout goes to the character of Hannibal Chau, an eccentric dealer in Kaiju organs on the black market. He’s got such a strange style sense with a personality to match that he instantly leaves an impression on you. For me, his character almost stole the show, granted he had very little actual screen time to do so. Perlman gives a great performance and really settles into his role nicely that it doesn’t seem too over the top. 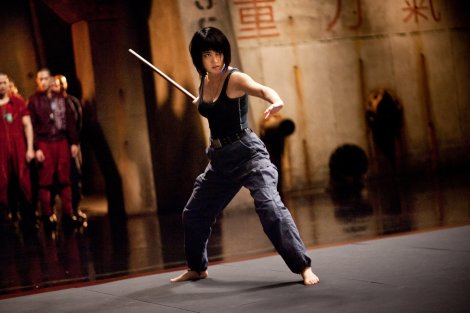 The story does tend to fall back on some cliches, while avoiding some altogether. In fact, it reminded me a bit of Independence Day, as odd as that is. We’ve got destruction on a massive scale. The commander makes a rousing speech that gets everyone fired up. Even the climax is similar in its resolution. I’m trying to avoid spoilers, but if you’re reading this and you’ve already seen the film, I’m sure you know what I mean. On the plus side, it does do away with some tropes. For one, the female lead isn’t all sexed up. Rather than make her weak or show off her body for fanservice, she does in fact get in on the action and is just as strong as the other pilots. Then there’s the multinational effort to save the world, which is way more realistic than watching America save everyone all by themselves. Even Australia lends a hand, and I don’t recall them doing any international service since hosting the 2000 Olympics.

I think this film succeeds on a lot of fronts. Del Toro’s obvious love for mecha anime and Japanese monster movies is evident in every scene and set. It’s been compared to Neon Genesis Evangelion by a lot of people on and internet, and while I don’t disagree, it’s not the only thing it pays homage to. It reminds me of the shows I grew up with like Transformers, Voltron, Big O, and even Power Rangers. I loved those shows dearly, and I loved the classic Godzilla movies. Seeing this film is like watching my childhood fantasies come to life and if that was Del Toro’s intention with this film, I’m all the happier. Pacific Rim is a must-see film for all the sci-fi fans out there who love to see two great things collide spectacularly and a love letter to the great mecha anime and monster movies of our childhood.

One response to “Review – Pacific Rim”