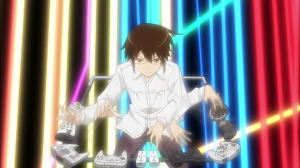 It’s been a long wait, but the time has finally come for Keima to return in The World God Only Knows III.  Upon looking up the official name of this season, you may notice that it also mentions the Goddesses Arc.  If you are a fan of the series and have read far into the manga, then you may be confused about how the anime suddenly reached such an important arc.  Well with this episode, you’ll instantly find that many arcs prior to the Goddesses Arc have been skipped entirely.  Although Keima briefly recollects several scenes with the girls from the skipped arcs, most of them don’t even have their actual names mentioned.  This really bothered me as a fan, since I enjoyed most of the arcs that were skipped.  It’s a shame that many interesting characters will miss their chance to shine, but let’s not dwell on that too much, as this episode still offers many great things!

Which one is hosting a goddess? Stick around and find out!

The first ten minutes of the episode include a recap of the first two seasons and moves on to briefly show the characters whom Keima had conquered between the last season and this one.  The only characters to receive a slightly longer recap are cross-dressing Yui Goidou (CV: Ayahi Takagaki) and tsundere Tsukiyo Kujou (CV: Yuka Iguchi).  We’ll go over the reasons why those two got more attention in the near future, but let’s move on for now. 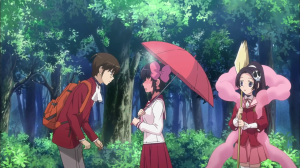 As Keima heads out for school with Elsie, he is greeted by his childhood friend, Tenri (CV: Kaori Nazuka).  Tenri tells him that the goddess inside of her, Diana, wishes to speak with him about some important matters.  For those of you who have missed the Tenri OVA and haven’t read the manga, I suggest you look at either one to avoid any confusion.  Diana then takes over Tenri’s body and explains to Keima her existence as a goddess and informs him about her other sisters, who may be hiding in his past conquests.  Diana then requests that he helps find them and gives him a helpful hint, which is that girls hosting fellow goddesses will retain memories from the conquests.  With this, the Goddesses Arc officially begins, as Keima is forced to take a break from his usual routine of conquering hearts, in order to backtrack and find the possible hosts of goddesses.

Haha, one of my favorite facial expressions from the manga.

Next, we see a few scenes with Kanon, who has recently discovered that she is the host for the goddess, Apollo.  Although Apollo’s initial appearances only leace Kanon confused, she decides to focus on her upcoming exams and ignores Apollo for a while.  When returning to her school, Kanon is conflicted over how to approach Keima, as she has regained her memories of the past, but feel that she was rejected by him.  It seems that our idol can’t seem to catch a break, as Apollo soon reveals that a stranger has begun stalking her, which stresses her out a lot.  After a few encounters with the hooded stranger, Kanon finally breaks down in class and rushes towards Keima to confess everything to him.  This shocking and touching moment is ended quickly when Apollo takes over Kanon and flees in order to prevent Keima from being too involved with her recent troubles.  Unfortunately, Apollo is soon caught outside by the stranger, who reveals herself as a demon named Lune.  The episode then ends on a cliffhanger, with Apollo being stabbed by Lune’s strange dagger.

Quite a grim way to start off the season…

Overall, I am quite ecstatic about the return of TWGOK, but also very disappointed at the same time.  While the Goddesses Arc is very interesting and significant to the main plot, I would have probably enjoyed seeing the other arcs getting more attention.  Especially after seeing the teaser at the end of second season, I had high hopes for seeing the rest of the manga being adapted.  Unfortunately for the fans and I, many unique characters and arcs probably won’t get their chance on screen.  I guess they really wanted to get to the main bulk of the manga’s story, but it’s just a shame that the potential of so many previous arcs have been wasted.  Despite my disappointments, I still loved everything else about the episode.  The visuals and music are still top-knotch, while the story is still being adapted faithfully from the manga.  Although there is quite a bit of information to absorb in this episode, it’s still an enjoyable and intriguing watch.  This season appears to be maintaining the high quality of the prior seasons, so it’s simply exciting to see how well they execute the scenes and events.  The only thing to really dislike so far is the fact that they condensed the missing arcs into a really brief recap at the start of this episode (seriously, what a tease).  Perhaps there could be OVAs released in the future to cover the missing stories, but we’ll just have to settle with enjoying the Goddesses arc for now.  Well, until next week!

One response to “Impression – The World God Only Knows III, Episode 01”