I may have wanted the show to get back to the action, but I did not expect such funny stuff. That is right, a good portion of this episode focused on the romantic comedy part of the story. That isn’t the biggest part of the story, but it is there. You can’t skip this episode because there is some important stuff going on. Also, it was a fun watch overall. 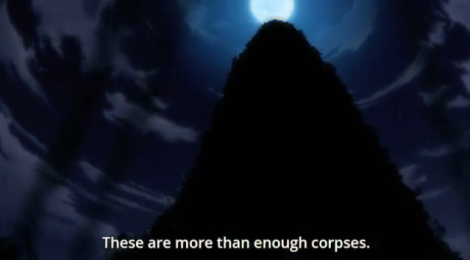 That is a lot of corpses.

Well, things are definitely not going very well in the rest of Japan. Apparently, there are a bunch of Crucifix Insects that have been getting areas ready for their master Yukimura. That involves killing everyone and spraying their blood like a beacon for their master. These guys are probably pretty tough, but they did not encounter Jinbei and company. Apparently, an entire army was defeated by a single insect man in the past, so defeating that Sasuke guy was pretty damn impressive. The Shogun had to falsify some stuff regarding the Mushibugyou in order to keep everyone sane and things are not going too well. Let’s skip to the end of the episode. The Mushibugyou, Jinbei, and the Shogun’s most trusted guard are traveling to Kishuu in order to restore the Mushibugyou’s power. I guess that the Shogun’s treasure holds the key to that for reasons that are not yet explained. Also, Kishuu was supposed to be the stronghold that would stop the insect men from advancing. Honestly, that is not going too well. I am looking forward to this journey that is about to happen.

The girl wants to know.

Well, things are developing in a hilarious fashion. Ieshige was going crazy because no one would tell him about the meeting. The young man wanted to tel Jinbei about the crazy shit going on because the dude totally wants Jinbei. That was supported by the next couple of things that happened. The Mushibugyou went to Ieshige’s room that had a “No Girls Allowed” sign on the outside and a bunch of Jinbei memorabilia inside. The guy has issues. The Mushibugyou was looking for a way to meet with Jinbei because Ieshige has found a way to do so. That, and the Mushibugyou did look for a way to revive her powers that was later supported by her talk with the Shogun. Oh well, back to the funny romance. After the trip to the room of Jinbei worship Ieshige shows the Mushibugyou his telescope that is used to stalk Jinbei. That is totally not creepy. On the other end of the telescope, Jinbei’s dad tells the story of how he met Jinbei’s mom. She was a fine master of the sword that was on even part with Jinbei’s dad. They fell in love, got married, and conceived Jinbei while fighting. That is not odd at all. She is no longer around and that part was not explained. Oh, and Jinbei’s dad asked Oharu to marry Jinbei. That did not sit well with the Mushibugyou or Hibachi. I didn’t really expect that one, but it makes sense in anime for all of the girls to at least have a crush on the protagonist for very little reason. That was some hilarious stuff.

How did she fight while pregnant?

This series just keeps getting better. I actually really enjoyed the romantic comedy that we saw in this episode. I would have liked to avoid the comparison between Oharu and Kanae through breast size, but that is something that was bound to happen. Jinbei’s dad seems kind of creepy now. Also, Oharu didn’t say “no” when she was asked to marry Jinbei. I would be more excited about that if I didn’t support the Mushibugyou in the race for Jinbei. I just think that there is more there and I like the Mushibugyou’s character. They are about to go on a trip together, so I am expecting some romance. That guard guy better not be a total cockblock. I would like to know more about Jinbei’s mom because saying that she is no longer around is a little vague. Someone as strong as her would not die easily, so there is a story to be told. Most people think that Kanae is the key to Jinbei’s odd power that showed up on Hachijo Island. Needless to say, I can’t wait to see the development between Jinbei and the Mushibugyou on the trip to Kishuu.

She is hiding her status again.

Hiding her status is for more than Jinbei this time around. News of the Mushibugyou leaving Edo would endanger both her and Edo itself. I am curious about a lot of things at this point in time. The first is the strength of this guard guy. If he is the Shogun’s most trusted guard, then he must be tough. If not, then this is going to be a little confusing. One would think that only strong people could guard the Shogun. Then we have the Crucifix Insects. Those guys seem way too tough and I want to see a fight. Sasuke seems to be weak in comparison to the other forces, so I need to see a good fight. I am wondering if Jinbei is going to have to get his mouth on the Mushibugyou’s hair to handle things. That would be a little odd to me, you know, to watch it happening. However, it would also be nice to see Jinbei not sucking. He is still very weak when compared to the others and everyone knows it. Next, there is the general secrecy around the insect men. What are they? What is their goal? How did Kishuu fall so easily? What will restore the Mushibugyou’s power? What is the Mushibugyou’s relation to the insect men? All of that is on my mind. I am just looking forward to some answers in all honesty. 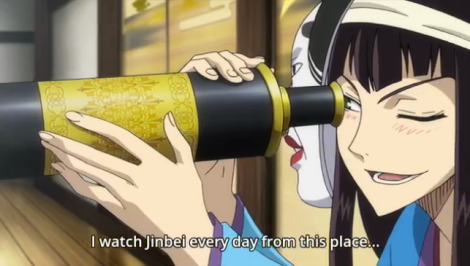 Not creepy at all…