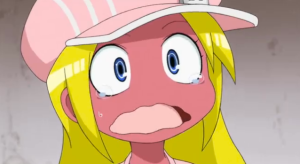 Well, we have another leg of the journey for our brave heroes. Unfortunately, this is another episode that lasts for less than five minutes. Oh well, prepare for a well-written four minutes of entertainment.

Alba is destined for jail.

We got to see what the murder thing was all about. Hime and the gang needed a distraction because the guards at the city would obviously recognize the princess. Ares decided to stab Foifoi, give Alba the bloody knife, and run into town with Hime as they scream “MURDERER” in order to slip by the guards. That is a brilliant plan in all honesty. However, I am a bit disappointed by the fact that the blood was fake. I am used to this series giving us actual physical pain and Foifoi getting stabbed would have been great. Alba had to run because he is a wanted man, so Foifoi abandoned him soon afterward. On the other end, Samejima explained that he was able to enter the pocket dimension and rid Januar of his brainwashing through the power of manly friendship. I can accept that. Oh, and Ross is getting sick because he has a physical need to abuse Alba that is not being met. Fun stuff if you ask me. 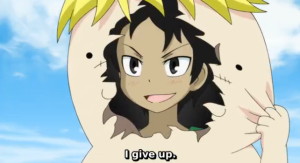 I am enjoying this series. Although Ross is probably my favorite character in this series, I am a much bigger fan of what is going on on Alba’s end. Hime and Ares are pretty damn entertaining. Ross just hasn’t been his usual self without Alba there to abuse. I honestly don’t know exactly what is happening next and I like that about a series. I mean, Alba is going to fight the bounty hunter and something is going to go down in the pocket dimension now that Samejima broke the barrier, but the comedy is unexpected enough. I still get some good laughs out of this series and it could only really be improved by becoming a full-length series. I don’t want to sound like a broken record, so that is all I will say about that for now. I am really looking forward to seeing more from Ares and Hime moving forward.

That is pretty manly.