It looks like we get some action in this episode, as Manatsu faces off against Ichijou and Ricardo in a battle of supernatural proportions! It’s as if Dung snuck into the writer’s room and demanded that there be more action. Granted, this show isn’t about supernatural beings having fights to the death but more about Izumiko’s place in a world where supernatural beings roam about just beneath the surface of everyday life. Just another day in the life of a spiritual vessel, I guess. 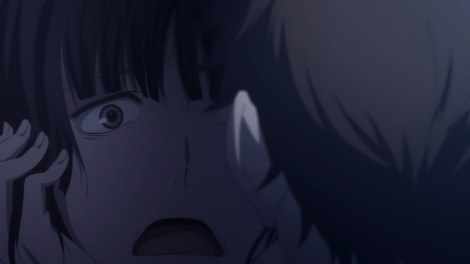 The fight at the beginning doubles as an introduction to Masumi Souda, the deceased triplet to Manatsu and Mayura. Even after being dead for so many years, the siblings still call upon his spirit from time to time for help. In this case, it’s to show how powerful he is to Ichijou and get payback for what happened to Mayura during the last episode. I thought it was really funny seeing the cold and confident Ichijou being slapped around and brought to his knees. It’s an extremely humiliating defeat, to say the least.

We also get some more hints about the school’s purpose thanks to Yukimasa, who appears at the school as a part-time teacher. He’s there to oversee a project that determines who can see and make contact with divine spirits. Those special people are becoming a rare breed, and if they go completely extinct, it could upset the balance of the world and cause the human race to disappear. Now the title of the series makes sense, as it references the real life Red Data Book that catalogs endangered plants and animals. Izumiko’s kind is extremely rare, hence the title Red Data Girl.

We’re also introduced to two new characters, the student council president Jean Honoka Kisaragi, as well as the original president Hodoka Murakami, who may or may not be a spirit. Murakami asks Izumiko to do a Shinto dance, even putting stage makeup on her. Before she can, Miyuki arrives, clearly upset that the two are speaking with her. This causes the Goddess spirit to take over Izumiko, who then asks that Miyuki prevent her from completely taking over Izumiko’s body as she will bring about the destruction of the human race. Um, wow, that’s a heavy plot revelation. I wonder why they only know mention this? She doesn’t go into detail about what she means exactly or how she could bring about the end to all humans, so it’s another mystery that is left unresolved for the time being.

Things are starting to get complicated. There’s obviously much more going on behind the scenes than what Izumiko is aware of. Considering the school isn’t normal and seems to host a variety of supernatural figures and spiritual users, it’s probably no coincidence that she was enrolled there in the first place. The return of the Goddess spirit also drops a big shocker to Miyuki, although it’s quiet sudden and unexplained. With the stakes suddenly raised so high, I’m curious about how they’ll deal with this.