Preparations for the upcoming school festival are coming up, and the student council is busy getting ready for the school’s biggest event of the year. I thought it was strange that they would go for a Sengoku period theme for the entire festival, but it actually seems fitting. After all, the whole mythology of the show is based in old folklore, and using the Sengoku period as the festival theme harkens back to a more superstitious era. 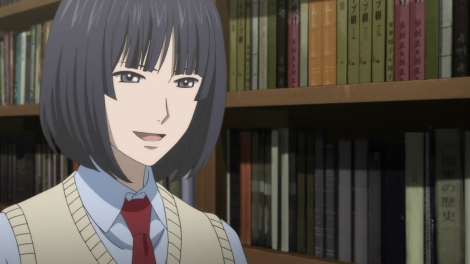 Now that the whole Souda triplets business has been taken care of, we can get back to the central conflict between Mayura and Takayanagi. We haven’t seen the latter since his humiliating defeat, and it looks like he is up to no good again. He wants to settle the score once and for all, and the school festival will be the deciding factor in it all. You know, I’m still in the dark about what exactly they’re trying to do. I get that they’re fighting to be a World Heritage Candidate, but why all the secrecy and politics? It would just be easier to throw them in a pit and have them fight for it. At least we’d get some entertainment out of it.

Izumiko seems to to be getting more and more confident, even if it is gradual. Watching her ask Miyuki to teach her a protection spell reinforces her desire to not be weak anymore. We’ve seen glimpses of this several times now, such as when she dealt with Wamiya and during the search with Manatsu. Rather than let Miyuki do all of the heavylifting, she’s willing to take on some of the burden herself. Seeing her go out of her comfort zone to stand in for the kimono workshop was great, as it’s something she never would’ve done in the beginning.

Miyuki is starting to show more concern over Izumiko, at nleast for her well-being. He’s worried about the ramifications if the Goddess were to show up out of nowhere, so he constantly tells Izumiko to keep her hair braided. It was funny seeing him scold her right after the kimono workshop for putting her hair down right after telling her not to. He’s acting more like a concerned father than a close friend/potential love interest. Even Izumiko isn’t all that amused, though she’s probably frustrated by his attitude lately. After all, she just wants him to approve of her “as a normal girl.”

On that note, just how exactly does Izumiko wash her hair? The thought has crossed my mind before, but they keep saying that undoing her braids unleashes her spiritual power and allows the Goddess to take over. If that’s the case, does she just keep her hair in braids all the time? I can’t imagine that being good hygiene. Oh well, just another unexplained mystery to me, I guess.

Speaking of the Goddess, she manages to make an appearance despite Izumiko having her braids tied. It looks like she’ll be able to do that at any time now, much to Miyuki’s worry. She doesn’t make appearances without a reason, and this time she comes to warn Miyuki again. She has been trying to prevent herself from destroying humanity in the future, so she’s traveled back in time to look for someone who can stop her. This is currently her third trip through time, and it’ll likely be her last with Izumiko. It looks like the stakes have been raised yet again, and Izumiko is right in the center of this one.

We got a lot of plot revelations this time around, and they all revolve around Izumiko. The school festival is almost here, and now Takayanagi wants her to join his side. Both him and Mayura seem to value Izumiko’s powers very highly, so her decision could tip the scales in favor of the one she chooses. Then there’s the Goddess telling Miyuki of her goal to prevent the destruction of humanity. Izumiko will be the last person who can channel her, so it’ll have to be Izumiko who can stop the Goddess’s destructive future. Summer has just ended for Izumiko, and already her troubles have begun to pile up.