Kodaka has to deal with too much shit.

So I was really excited for this series because I loved the first season of Boku wa Tomodachi ga Sukunai. Go out and watch the first season before you try out this one because the story is pretty important. The new season picks up with the same style as season one which is something that I am happy about. For those of you that are like my friend and will watch this without watching the first season, here is a quick overview of the first season that people who watched the first season do not need to read: Kodaka and the rest of the members of the club have trouble making friends because they are all odd to an extent. The group gets together in the effort to make friends, but that doesn’t really seem to be what is going on. They are obviously friends with each other. All of the girls are interested in Kodaka, but the only ones that have a chance are Sena and Yozora. Yozora is Kodaka’s childhood friend that he doesn’t remember and Sena’s dad is friends with Kodaka’s dad. Sena appears to have the lead because Kodaka just remembered Yozora. Because Sena is in the lead, and gets most of the screen time with Kodaka, the other girls often bully her. Kodaka usually helps her out. That is over. We get our classic Yozora messing with Sena, but this time Rika and Yukimura join in on the harassment. Like always, Kodaka has to deal with all of the antics, but that stuff isn’t really the main plot. Kodaka visits Sena’s house for studying and keeps getting obvious hints that Sena’s family wants her to be with him. The romantic elements are really interesting and this series has done something that I am not used to and that is forcing me to not root for the childhood friend. 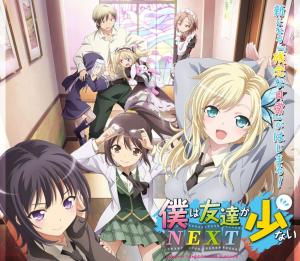 The girls appear to be sized in order of importance.

Even though we didn’t see a lot of most of our characters in this episode, we have season one’s development to add to the characters. All of the characters are odd to an extent and have trouble making friends. Kodaka is the main character who fills the straight man role at most times. Due to his mixed race, Kodaka has semi blonde hair that, coupled with his awkward way of presenting himself, has made people think he is a delinquent. Yozora is Kodaka’s childhood friend and kind of a tom boy. Unfortunately, Yozora is kind of a bitch to others which bothers Kodaka even though she is nice to him. Sena is a school idol, but that makes other girls hate her and guys not want to just be her friend. Sena has a superiority complex and is a little too into visual novels, but maybe the worst part is her naivety. Luckily, Kodaka protects her from most of the crazy stuff that people try to do to her. Yukimura is a young boy that looks way too much like a girl. Yukimura wants to become a strong man who is why he wants to become Kodaka’s follower due to the misunderstanding over the whole delinquent thing. Rika is a young girl that gets her own lab to work in due to her great intelligence. The unique thing about Rika is not the fact that she likes yaoi doujins, but the fact that she like mecha yaoi doujins which is crazy as hell. Kobato is Kodaka’s little sister that has a bad case of Chuunibyou coupled with a brother complex. Maria is a young member of the church that looks to Kodaka as an older brother which gets her into fights with Kobato. Pegasus is Sena’s father who is friend’s with Kodaka’s dad. Kodaka is a little troubled with the odd behavior that Pegasus shows which is basically using Kodaka as a replacement for his father. I think that there will be more characters introduced in this new season, but those are the characters that we saw in both the first season and first episode of this new season. 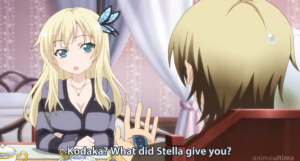 I need to see more of these two together.

I am liking this season as much as I did the last one which is a lot. In a harem anime that follows high school life the only thing that can really make the series stand out is the characters. Luckily, the characters in Boku wa Tomodachi ga Sukunai Next are very interesting and they make for very good humor. Definitely catch the first season if you haven’t already seen it because I heavily recommend it. I am looking forward to seeing how this new season will develop our female characters.

I would not bathe with other men.