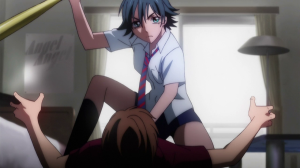 Quite the first encounter.

Alright, so Kimi no Iru Machi (also known as “A Town Where You Live”) is a fairly popular drama and romance shounen manga.  A while back, Tatsunoko Productions tried their hand at making a 2-episode OVA for the series, and it was honestly a mess.  Their attempt was inconsistent, confusing, and simply didn’t do justice to the original story.  Now, another tv adaptation for the series has come out, and Gonzo has taken up the job.  Since Gonzo isn’t a terrible studio, I hoped that this new series could make-up for the OVA.  Unfortunately, I was let down by the first episode, which skips a ton of chapters and picks up from where the OVA left off.  We start with Haruto Kirishima (CV: Yoshimasa Hosoya) leaving his home town to pursue a girl he fell in love with, named Yuzuki Eba.  Despite his friends and family being against his plans, Haruto heads to Tokyo and stays at his sister’s apartment. 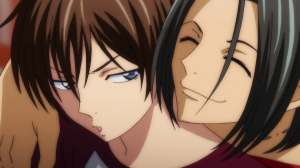 Only a few minutes in, and he’s already found a new best friend. Pretty good, Haruto.

After being ditched at his sister’s messy apartment, poor Haruto is ambushed by a masked stranger with a bat.  It turns out that the stranger is merely the girl nexted door, named Asuka Mishima (CV: Ayane Sakura), who thought that he was a burglar.  Haruto soon clears up the misunderstanding and meets Kazama Kyousuke (CV: Daisuke Ono), a friend of Asuka who stopped by.  Haruto heads out to hang with the two for a while and eventually gets into an argument with Asuka over his country dialect.  After provoking Asuka for a bit, he soon finds that she is also from the countryside and shares a similar dialect.  The two briefly show a moment of interest in one another, before being jokingly interrupted by Kazama.  Haruto has his first day of school on the following day, and is positively received by his class thanks to some support from Kazama.  Although Kazama and the rest of the class try to give him a proper welcome, Haruto remains despondent thanks to his thoughts of running into Yuzuki.  Asuka later tries to cheer him up while eating dinner with him, leading to the two sharing a few laughs.  The next day, Haruto is still obsessed with meeting Yuzuki and manages to run into her sister before the episode ends. 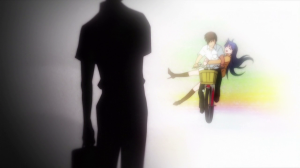 He might be a little too obsessed, but keep in mind that this is a drama series.

I had high hopes for this series, but was a tad disappointed with the way they decided to start it off.  I seriously dislike how Kimi no Iru Machi and other series this season, such as TWGOK and Rozen Maiden, have decided to skip a ton of content from the manga.  Along with the rough start, I also wasn’t a fan of some of the voicing, as they kept all of the voice actors from the OVA.  Although a lot of people might not have a problem with the voices, I personally thought that Haruto’s voice doesn’t fit him too well (although Yoshimasa did a great job as Mr. PLEIADES in Robotics;Notes).  Aside from those issues, I enjoyed the new artstyle, which resembled that style of the manga more than the OVA.  The overall presentation of the story and the pacing has also improved from that of the OVA as well.  Since the story seems to be more properly represented in this adaptation, I’ll certainly try to get over my problems with the voice-acting.  This adaptation has potential to represent the manga in a more coherent manner, so we’ll see how they do with next week’s episode, which should finally bring Yuzuki into the picture again.