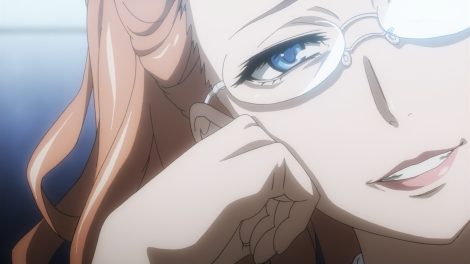 After getting thrown in jail from the first season, Therestina has a nice little heart to heart with Misaka about the darkness of Academy City. Unlike Misaka, who merely adopted the darkness, Therestina was born in it, molded by it. Okay, I’ll stop. While it’s pretty clear that Misaka has had her fairly serious run-ins with the city’s dark underbelly (Level 6 Shift Project was pretty grim after all), it appears that that is simply the beginning of the nightmares that the city has to offer. Even though this arc is kind of filler-ish, I like that it’s expanded upon Misaka’s experiences from the previous arc, rather than simply throwing them out completely in favor starting something new.

We also get to see more of ITEM and their sort of normal side. Apparently, Takitsubo likes to play dead in the water while Kinuhata needs a floaty to swim. After getting an anonymous phone call, the 4 member team goes out to a lab to essentially just mess everything up. Incidentally, it’s the same that both Nunotaba and Misaka are snooping around. As suspected, Nunotaba is the one who taught Febri Misaka’s name and was also the one who set her free from the group of scientists (who I believe we can refer to as STUDY).

Febri is the product of STUDY’s project that they wish to exhibit at the Academic Assembly. However, it turns out that she is not the main attraction, but only a stepping stone for JANIE (which sounds a lot like “journey”). Still, Febri’s exact function has yet to be revealed, but it definitely has something to do with the method in which those mechs are controlled. If Febri is supposedly just a spare, what does that make JANIE? And while Nunotaba went against STUDY, how did she end up there in the first place? If the preview is any indication, I think we’ll find out the answer next episode.

While part of me thinks that Railgun S would have been perfect if it just ended right after the Sisters Arc, I don’t hate this second arc. It just doesn’t quite live up to the precedent set before it (but who can really blame it?). This new arc is pretty reminiscent of things we saw in the first season. It’s good (great even), but not amazing like this season’s first half. But still, there are two more episodes left for this arc to wow me. I’m eagerly waiting for that moment to happen.