What did I expect from this series? Well, it is a sports anime and that means a focus on something that I watch outside of anime with a heavy dose of homosexuality. The bromantic vibes weren’t too strong, but we did get to see some heavily realistic sports. Production I.G and Madhouse Studios teamed up to give us what I think will be a fairly realistic series.

High school takes it up a notch.

This is literally a story about a guy that will be playing baseball in high school. That is a skeleton for a lot of series actually. Eijun is a very spirited pitcher that worked hard everyday to make memories with his middle school baseball team. The school was going to be demolished after his third year, but they ended up losing in the end. Eijun’s recruiting stock was hurt by his slap fest at the end of his last game. Eijun started studying in a frenzy so that he could go to the same high school as his teammates, but a variable was thrown into the equation that Eijun couldn’t solve when a scout from Seidou High School showed up to offer him an invitation to the team. There is disbelief due to the fact that Seidou is one of the top baseball high school in the country, but Eijun ended up visiting the facilities regardless of his sentimental desires. The high-tech equipment and determined players started to reel in Eijun, but it was an arrogant asshole that sealed some kind of deal. Eijun would not let the future pro continue his tirade and a match started. Eijun and a cheeky catcher are about to take on a future pro. I expect a very shounen result to this battle in the next episode.

Well, they did not expect Eijun to leave them.

As far as the characters go, we only really got to know out protagonist. We met a lot of other people, but they will have varying levels of importance as the series progresses. It is because of this that the characters I talk about, aside from Eijun, will have fairly short descriptions. Well, it was only the first episode of the series.

Eijun is a very headstrong young man with a love for baseball and his teammates. He has a lot of raw talent as a pitcher, but the lack of skill around him has held his development back quite a bit. Having said that, you better not mock his teammates because the slap fight will be on if you do so.

Miyuki is a catcher from the Seidou baseball team that enjoys a bit of chaos. We don’t know much about him aside from the fact that he will obviously be working with Eijun. That makes sense because they are a pitcher and a catcher.

As far as other characters go, we have teammates from Eijun’s middle school and new teammates from Seidou High School. Will the little lady that possibly liked Eijun stick around? I would think so, but we are about to meet a lot of people because sports series always have a lot of recurring characters. They tend to make other teams have fairly important players.

I am looking forward to some baseball.

I can see a lot of potential in this series. Why is that? Well, it seems fairly realistic. I have watched things like Prince of Tennis and Eyeshield 21, but it is definitely the more realistic sports series that I enjoy. That was Kuroko no Basuke for a while. Also, the fact that Japan loves baseball more than we do over here in the states means a lot when it comes to producing a quality series. I really enjoyed One Outs and this could definitely be entertaining. It would have been nice if they didn’t make the end result of this trip so obvious. We all know that Eijun is going to join the Seidou High School baseball team. Did I just spoil it for you? That’s just too bad because you can obviously see Eijun in the Seidou uniform in both the opening and all of the official pictures from the series. Do I think that he is betraying his teammates by leaving them for Seidou? Not really. In fact, I assume that we will get an episode in the near future in which he denies the invitation, but his teammates urge him to follow his dreams because they could never take him to nationals. It will be fairly emotional and heavily predictable. 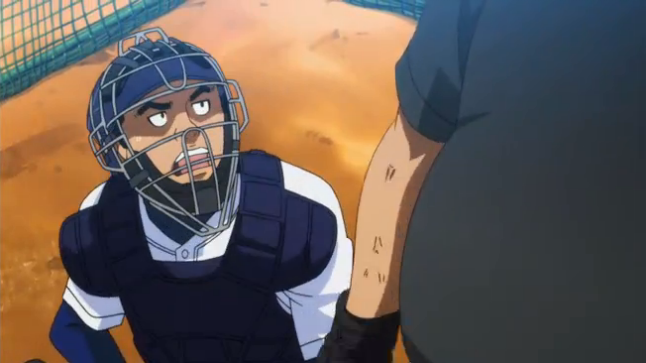 Why would you piss off the giant?

There is another fairly obvious event coming up. Eijun said that he threw eleven pitches that ultimately changed his baseball life. There are two very shounen outcomes that are easily thought of in this situation. The first is a less likely eleven hits allowed. This would be a message to Eijun that he has a long way to go. The other would be a ten hits allowed outcome in which Eijun finally gets a pitch through at the end. In both situations, the better players and coaches will at least see the raw potential in Eijun during the display. In the latter one, everyone will acknowledge his talent. I don’t really expect an outcome aside from these two simply because it is a classic shounen device to make the character suck, but show potential in the beginning. Sports series often feature characters with raw or no talent that have to work hard in order to achieve their goals. This shows viewers the value of hard work because we wouldn’t really want to watch a series that features natural talent. Everything would look easy and there really wouldn’t be a story of growth there. Overall, I am hoping for a fun experience with a new sports anime.