This is a very interesting series. Unfortunately, it ended pretty early. Only getting eleven episodes kind of sucks and it reminds me of the ten episodes that Maondaiji got last season. Is there anything for the fans of Gin no Saji to look forward to? The second season has been announced for a while and it will be coming out in January of 2014.

Bacon is a powerful thing.

Having food makes one very popular at this high school. What was the episode about? The bacon of course. The teachers, students, and even Hachiken’s brother show up in order to partake in the bacon that was lovingly made from scratch by Hachiken. This is a farming school, so people really appreciate things like fresh food. Hachiken has been approached in several ways for his bacon. He sent some to Aki’s family and Komaba’s family. The guy even sent some to his own parents. Some people offered cash for it. A young lady that appeared to be confessing to him wanted some for pizza. I guess that students can use the brick oven now. Some third years decided that trading their own products would be good. Hachiken has become pretty popular recently. Unfortunately, he still seems lost. Hachiken views himself as a coward that ran away without a clear path in life. However, the short guy has decided to throw out his wisdom once again. Was running away really a bad choice? Have you not gained a great deal as a result of your cowardice? Is being forced into a career the same thing as having a goal? Hachiken is starting to learn a lot about the world around him, but he still names the damn pigs.

I wanted a confession as well.

I seriously think that Gin no Saji is one of the best series to come out in the Summer 2013 Anime Season. What do I personally think beats it out? I haven’t watched everything yet, but I do think that it is a close second to Kamisama no Inai Nichiyoubi. Oh well, let’s talk about this series. Something that I look for in a series is a story that makes you think. Deep questions without clear answers. The look into the lives of farmers and those that are related to the profession has been a refreshing story in a media filled with high school harems. What did this series do well? The characters were great and that is very important in any series. If there aren’t any likable characters, then it will be hard to care about their problems. The story was also very well-written. I love the trials of being a farmer theme and the unorthodox coming of age story. No matter where we are from, everyone has their issues. Anything else? I think that the artistic style is a little under appreciated. Does anyone else watch this series and get really hungry? That animation budget was thrown at the food. Overall, Gin no Saji is a great series that is very deserving of the second season that will be coming out soon.

I want to see more of the parents.

We should talk about the great stuff that happened in this episode before the one season hiatus. First of all, the bacon buying stuff was great. I was really hoping that the girl was going to ask out Hachiken because it would have been hilarious. I know that he may be awkward and whatnot, but I can easily see Hachiken being fairly popular. That doesn’t just apply to girls. The guy is making a lot of friends with the cooking that he has been doing. Oh well, that was good for Aki. On another note, I really liked the baseball. I am hoping that they show us more games, but I am not sure how much they will actually be showing us. I know they will talk about it and that there will probably be an episode about the team not making it to nationals, but I think that most of that subplot will be handled through stories. What I really care about is a certain set of parents. I am looking forward to a visit from the Hachikens that is bound to happen eventually. Whether it is good or bad, I just want to see this reunion. I assume that they may have something like a parents day. Unfortunately, that may not be a thing because everyone works on farms. Oh well, more stuff to look forward to. Can it be January already? 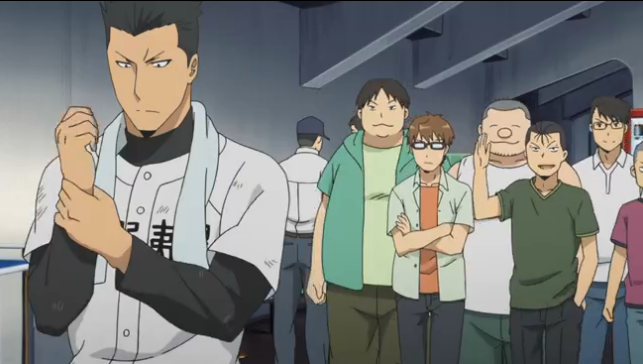 The group of random guys is growing.

One response to “Impression – Gin no Saji, Episode 11”