This will always be that series that gives me hope for cool things even though I know that they will always find a way to dash said hope. We are going to have the symphogear users fight each other, but everything will work out in a very convenient and cliché fashion. Instead of throwing something new out there, we can copy stuff from the last season.

Well, Hibiki and company will take care of it eventually.

They didn’t skip away from the fights for too long. The fight between Kirika and Shirabe went as planned. The two fought with one another even though they wanted to save each other. Swan songs were used and the fight heated up. It was mostly an excuse to show off the gears. Shirabe took a fatal blow from that giant scythe, but everything worked out. It turns out that Finé was supposed to be reincarnated through Shirabe, but the spirit had other plans. She decided not to reincarnate and let the girls handle things. However, she was able to use her soul in order to heal the almost dead Shirabe. On the other end of things., the fight between Chris and Tsubasa also went as planned. Chris “won” and demanded Solomon’s Cane. When that fell through, Tsubasa handled things and Chris apologized for leaving. Finally, Maria broadcasted her plea to the world, but her song was not strong enough to stop the moon. This betrayal led to Dr. Ver shooting Ma’am to the moon and killing her. Maria would have killed Dr. Ver is Hibiki didn’t stop her. Oh yeah, and Hibiki used her song to steal Gungnir away from Maria.

I am asking myself that same question.

I am not happy with the way that the series is handling things right now. The fights and the story itself is far too predictable. That in and of itself is alright because this isn’t supposed to be some groundbreaking series, but it is the predictable stuff that makes me cringe. Chris only wanted to stop Solomon’s Cane from being used for evil and Tsubasa helped her. Kirika was devastated by the fact that Shirabe was actually Finé, but there is nothing to worry about. Finé is good now and she will sacrifice this opportunity to reincarnate for a bet on the future. Will she ever return? Who knows? All I know is that the fights weren’t even fights and the friendship stories were unnecessary. The only real question left is in regards to the ending. I would say that there was actual doubt regarding that, but it is very obvious. Hibiki will channel all of the swan songs in order to power the structure and restore the moon’s orbit. The stress will be great, but I doubt she will die. That is the kind of series we are watching.

I almost expected that to be black.

I did find one thing interesting. Hibiki was able to use her song and steal Gungnir away from Maria. Is Hibiki’s synch rate the reason that she was able to take over the relic? Does it simply latch onto whoever sings last? Why does Hibiki not get the black one? Honestly, I just want to know how it happened. A higher synch rate would make sense because the relic would go with the person who is most compatible with said relic. That is going off of the assumption that shards from the same relic are all the same, but I think that these events support that statement. If we look at the way that Gungnir differs between the three divas, then one could say that the relic differs in appearance based on the user. This could have something to do with tone of voice, but I don’t think that they would give such an in-depth description of the phenomenon. Obviously, being the last one to sing would be stupid. The divas would keep switching off until one was too tired to sing. Well, this is either a very interesting mechanic that was put into action or they found a very convenient way to give Hibiki her powers again without risking her life. Either way, I no longer find this interesting. 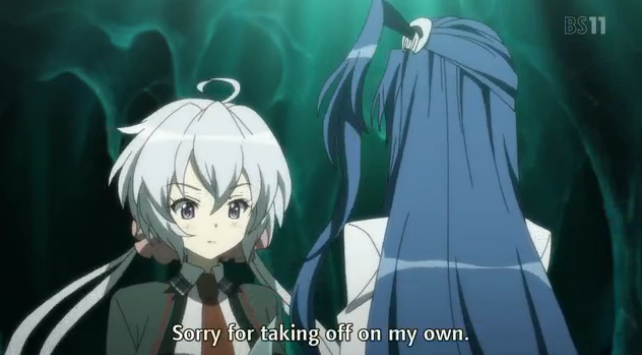 I want to punch something.