Despite being my (perhaps) most anticipated series of the new season, Coppelion thankfully did not manage to disappoint me, but instead left me with some fairly high hopes for the rest of the series. I’m not the biggest fan of the strict sci-fi genre, and thankfully Coppelion appears to have a plethora of different genre elements to offer. From an intriguing premise to colorful characters, there’s something for everyone!

The story takes place in the year 2036, 20 years after a nuclear disaster erupted within Tokyo and left it a ghost city. The levels of radiation make it impossible for normal humans to investigate it. However, this dangerous has been delegated to three girls who have been bio-engineered to be immune to radioactivity. Even in this first episode, the philosophical question of whether they’re really humans or merely dolls is brought up. 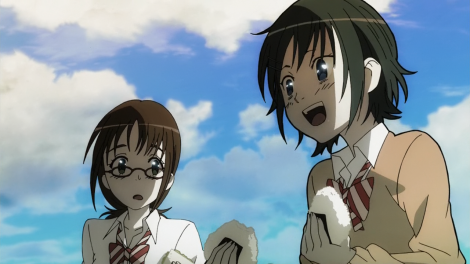 I love the three main characters already, and I think that how lively they are shows that they’re definitely human (at least, in my book). The leader of the three is the brazen Ibara Naruse (CV: Naruka Tomatsu, as Asuna from SAO) and is accompanied by the infectiously energetic Aoi Fukusaku (CV: Kana Hanazawa) and the proper and gentle Taeko Nomura (CV: Satomi Ikesaka, as Chrome from Hitman Reborn!). Aoi pretty much sets the mood for all of the scenes, lightening up an otherwise serious setting, and the other two act as the straightwomen.

I like Ibara’s down to business and grounded attitude, though, as well as her empathy for others over the rules. It was also interesting to see her prefer injected supplements over actually eating. It shows that even among the three girls, there are differences in philosophies.

Like K, this series also features great usage of the blue/green color filter. It brings life to the dead remains of Tokyo, which has been slowly reclaimed by nature over the past 20 years. The dynamic and cinematic camerawork also breaths a sense of liveliness into every scene, and it makes the experience more immersive in my opinion. One other thing I noticed is the lack of BGM, outside of a few instances where subtle music played. For the most part, Coppelion lets silence, sound effects, and characters do the talking. 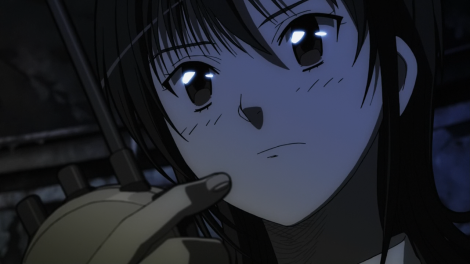 The final aesthetic device I want to talk about involves the usage of thick outlines, very similar to those in Shingeki no Kyojin. I was a little thrown off by it at first, but I got used to it as the episode went on. It creates a huge contrast between the characters and the backgrounds, but I haven’t decided if this is a good or bad thing yet. However, I can say that so far Coppelion strives to create an atmospheric environment, rather than drowning you with plot elements. The mystery is left out there for us to wonder and to wait for future episodes.

I’m really interested, and a little nervous, to see where the series will go from here. I remember being totally stoked after the first episode of K, but as the series progressed I felt that it didn’t live up to the potential it could have. Here, I feel that same amount of potential, it’s just a matter of whether it’ll realize it. Post-apocalypse settings are never really my favorite, but I like how the focus is own three seemingly normal girls, who have been sent on a mission much bigger than themselves. I can’t say exactly what I want from Coppelion, but I’ll know when I see it. However, I’m really enjoying what I’ve seen so far, and you can definitely expect weekly impressions for this one.

“This Pandora’s Box was opened by human beings. But, we still don’t know how to close it.”

One response to “Impression – Coppelion, Episode 01”