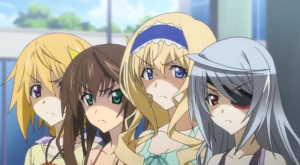 Well, we all knew that the Russian girl was going to be introduced in this episode. I guess that I was expecting a more stereotypical introduction, but there is supposed to be a story regarding a Japanese girl being Russia’s representative candidate. Having said that, this girl is crazy strong and that is pretty Russian if you ask me. Watch Hetalia if you do not understand how scary Russia is.

Even Laura got messed up.

This episode was basically a display of how aggressive Tatenashi is willing to be when it comes to Ichika. She challenged him to a match that would decide whether or not she could act as she pleased. The two physically fought and Ichika was getting his ass kicked. Tatenashi was toying with him until he “accidentally” exposed her bra. That led to Ichika getting knocked out. Tatenashi isn’t just stronger than Ichika. Houki and Laura both get stopped pretty easily by the student council president. Apparently, the title of student council president goes to the strongest student at the academy. That actually makes sense at a school that is all about training fighters and testing out weapons. It doesn’t look like Tatenashi plans on leaving Ichika alone anytime soon. She is already acting pretty lewd around him and Ichika is benefitting. Tatenashi’s training is the most constructive by far because she is properly addressing the weaknesses in Ichika’s piloting. The other girls were basically sparring with him. The display really showed off how far behind the representative candidates Ichika really is. Being the protagonist doesn’t instantly make you strong.

Tatenashi is going all out.

I am enjoying the direction that this series is taking. This is the first time that Ichika’s training is looking like something that will actually benefit him. They are also showing off his true level. Piloting an IS isn’t something easy. That is why all of these students are here. I would like to see Tatenashi fight for real. She appears to be leaps and bounds ahead of everyone else in the strength department. I know that the student council president is supposed to be the strongest student at the academy, but Laura and Houki looked kind of foolish. That is not easily pulled off. Are there other student council members that are similarly strong? Are there representative candidates in the higher grades that can also take on Laura and company? Is Laura weaker now that she has become adorable? I would say no to that last one, but it would be interesting to meet more strong students. On the topic of Laura, she is definitely becoming a fan favorite. I would say that Charlotte, easily a fan favorite from last season, should watch out, but she is kind of being shipped with Laura. Those two aren’t losing steam anytime soon.

A school festival was bound to happen. I am not even excited about the maid café thing because I think that we really missed out when Ichika decided to crush all of the original ideas. Why would they not want a pocky sharing booth featuring Ichika? That would have made some serious bank at a school that worships the only person with a penis at the entire school. Even a teacher was into that idea. Doing a maid café, even if you put Ichika into a butler outfit, will not make nearly as much money as the pocky idea would have. Ichika has no mind for business. Aside from that, there is something else currently on my mind. Remember how Ran was going to apply for the IS Academy? She talked about it during the first season and I am curious to see if she got in or not. I assume that they will either show her approaching Ichika at the school if she did or have her hiding from him when he goes back home to visit her brother if she failed the application process. Either way, I would like to know how that turned out. The season is going well, but I need to see some big stuff soon and I am not talking about breasts.

How are girls in harems so civil with each other?