It is always nice to learn more about the /generation of Miracles. Do you know what is very realistic about this series? Anyone that watched professional basketball can tell you that star power is necessary for winning championships. You don’t get by with a rag-tag bunch that uses hard work to overcome the big schools. I am not saying that hard work isn’t necessary, but talent is definitely a big factor in coming out on top in basketball.

That was anti climactic.

The episode was mostly a testament to the power of the generation of miracles. We got a flashback of Kiyoshi as he faced off against Murasakibara. Kiyoshi is very talented, but height alone can mean a lot in a game like basketball. The quirky and uninterested Murasakibara is a natural talent that excelled at basketball even though he was not fond of the sport. Murasakibara actually showed up to stop Tatsuya from playing in the tournament, but some childish comments brought the big man into the game. We were about to have a spirited battle that really lit a fire under Kuroko, but the flaw with street ball is the fact that you are exposed to the elements. The game was rained out, but that wasn’t the only thing that fell prey to the bad weather. Momoi was looking for Kuroko because she and Aomine had a falling out. She requested that he not be allowed to play in the last two tournament games. The flaw with the generation of miracles is that their young bodies cannot handle the stress of their immense talent. Kuroko was able to calm her down and he even showed Momoi his new move. Kuroko has been improving and that is a scary thought.

Kuroko is not pleased with the head patting.

I am glad that they are getting into the second tournament. Why is that? Well, Kuroko can only do so much as a utility player. That is what he is and he obviously needs more weapons in his arsenal. Let’s just say that this new drive isn’t the only thing that Kuroko is going to come up with. That unstoppable drive is fairly interesting. Being able to get past people like that can be useful, but it can only do so much if Kuroko is still a crappy shooter. He can drive past people and kick out for a sweet pass. It also makes it so that he may actually need to draw as defender as this will make him a ball handler. I am still waiting on some shooting ability from Kuroko. Are there professional players that shoot the basketball about as well as I do? Yes and some of them get paid millions of dollars. They are mostly defensive specialists as you rarely see guards that don’t at least try to jack up a few three pointers. They are no Midorima, but there is a little something that I like to call the law of averages at play there.

Momoi is an odd individual.

I know that the story is about Kuroko, Kagami, and the Seiren basketball team, but I would like to see more from the Generation of Miracles. We always here high praise and we get to see them whenever Seiren plays one of the high schools that has one of them, but Momoi brought up a nice little episode idea. She wanted everyone to get together and play. Wouldn’t you want to see a three verses three match between the members of the Generation of Miracles? I know that I would. We could also see some nice interactions between the six players and Momoi because they would probably hang out as well in this situation. That is a personal desire, but I think that it could fit into the story fairly well. As far as matches that are actually going to happen, I am looking forward to seeing the match between Seiren and Yosen. It will give Kiyoshi a chance to play against a great center and that is what I want to see. Mitobe is a good player, but Seiren needed a more dominant presence inside. Kagami may be a power forward, but he is usually doing his own thing. He plays more like a tall small forward. I may have talked so much about actual basketball in this article that I have driven away the fans of the series that are not fond of the sport. Goodbye everyone. 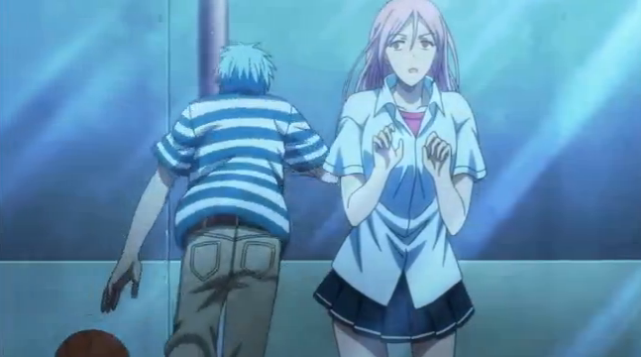 Not much of a defensive stance.

One response to “Impression – Kuroko no Basuke 2, Episode 02”