So we’re finally getting into the romance in the series. Being based on a visual novel, and a Key one at that, it had to happen eventually. It was only a matter of when. As I said before, a lot of what I liked about the first half of Little Busters was the fact that romance was largely put aside build a foundation of friendship first. For that reason, I’m actually looking forward to where the romantic elements go from here. 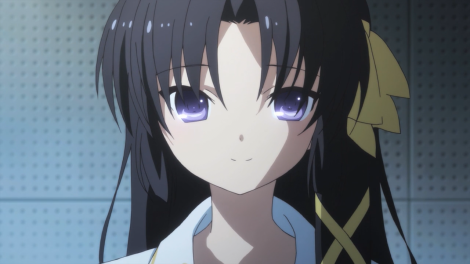 I typically don’t care that much about romance, but since the series was kind enough to develop the characters and bonds first, the romance here feels like a natural transition. That being said, I think I’d like to see Rin and Riki together, and it seems like that’s the route that the anime will take it. Though I’m not sure if the visual novel has a true ending with only one of the heroines, like Clannad. I believe Clannad’s true ending was the one with Nagisa and was the one that After Story adapts. Part of me wishes I had played Little Busters before watching the anime, but it’s also interesting for you all because it gives you a perspective from a clueless viewer/writer.

Not only are the homo undertones between Riki and Kyousuke reinforced in this episode, but Riki’s pressured into getting closer to Kurugaya. Though normally stoic, Kurugaya seems to show interest in Riki. However, Rin doesn’t seem too happy about all of this romance business involving Riki, and I can’t help but wonder if she know things that Riki doesn’t… Of course, she could just be upset because she might also have feelings for Riki?

Our suspicions from the last episode are also realized when Riki finds himself repeating the same day and the same events. What I’m left to wonder is why and if anyone else might also notice what’s happening? Though, if this is related to Riki’s condition, then it’s likely that he’s the only one affected and that his condition is creating these illusions. But are these illusions? Maybe he really is reliving these events and these days over and over.

What about Kyousuke? If his narrations are anything to go off of, he should remember. Maybe he’s trying to influence the flow of time to break the loop? It’s an idea that always gets used, but it’s pretty interesting. Man, too many questions and too many possible answers. My inane rambling must be hilarious for anyone who’s played the game before, though.