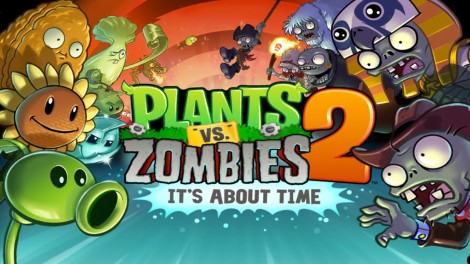 For those you who may not know what tower defense means, it’s a genre of strategy game that involves using resources to build up a defense against an oncoming enemy. PopCap Games took this formula and created a quirky backyard experience with the first Plants Vs. Zombies game. Four years, the new sequel reinvents the original game, adding a multitude of new ways to play while retaining the personality and fun that made the original great.

The basic premise of the game remains the same in the sequel. The resource we use here is Sun, which can be harvested periodically from the sky and more importantly generated by planting Sunflowers. For there, you can fortify your territory on the left side of the screen with offensive plants like the Peashooter and defensive plants like the sturdy Wallnut. While you have own last line of defense with the lawnmowers, once a zombie makes it all the way to the left side, it’s game over. 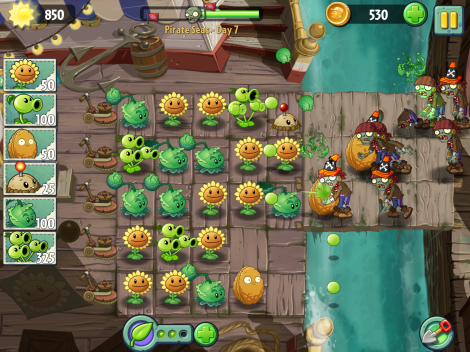 Where the original game had you defending your house from oncoming zombies over different terrain, the focus in the sequel has you travelling through different time periods and locales. With the enhanced graphics, every place, every plant, and every zombie looks great. You’ll progress through three major overworlds with Ancient Egypt, the Pirate Seas, and the Wild West, unlocking levels and new plants as you go on. With each change in scenery, there’s also a distinct gimmick requiring a change in play style. This adds new levels of depth to the experience, preventing the game from becoming cumbersome.

Not only are the settings different, but the types of zombies you encounter in each region change as well. For example, the Pirate Seas has you defending your ship from opposing pirate zombies, varying from swinging dudes on rope or Imps that get fired from cannons. To combat these wardrobe changed zombies, you get equipped with new plants not seen in the first game. Some of the cool ones include the Coconut Cannon that essentially fires Cherry Bombs to wipe out zombies in a 3×3 grid as well as the Lightning Reeds, great for frying chickens. 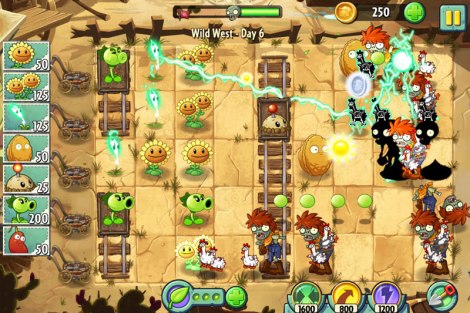 With the addition of these new plants and worlds, this means that the night levels and water based levels from the original are more or less absent from this game. I’m pretty fine with this because I feel that the nocturnal plants had fairly limited use outside of the night-specific levels, and the same goes for the aquatic plants. By taking those out and replacing them with plants that can easily be used anywhere and anytime creates a lot more options, in my opinion.

Probably the biggest game mechanic addition is Plant Food. Occasionally, zombies will drop these items that can be dragged onto your plants, granting them their special ability for a short period of time. A Peashooter with Plant Food will momentarily turn into a rapid fire gatling gun, while a Cabbagepult will launch cabbages onto every zombie on the screen. When used strategically, Plant Food can easily get you out of a bad spot. Plant Food also doesn’t carry over from level to level, so there’s no point in saving it! 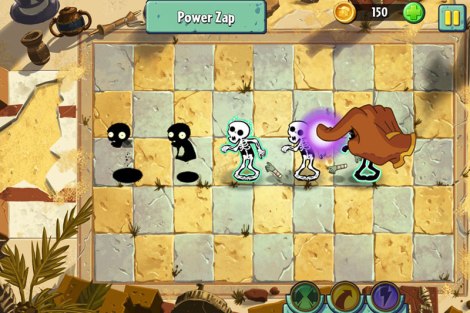 Since PvZ2 was created with touchscreen in mind, it has a few new features that rely on your finger to work.  Instead of tirelessly clicking on Sun and money to collect them, you can now just swipe your finger to collect everything (though, I assume this was the case when the original got ported to mobile phones). In addition, there are various superpowers that can be used at the cost of in-game money. These superpowers involve using the touchscreen to fling zombies away or zap a group of them to ashes. I’m a bit mixed on elements like this because it’s not required by the game to complete it and it uses a permanent resource, so it kind of feels like cheating to me. But still, it’s there for you to use in a pinch should you find yourself in a tough spot.

If you loved the first game, there’s very little reason for you not to check out the sequel. Rather than outright trying to copy and best its predecessor, PvZ2 takes an alternative route through space and time. There are plenty challenge levels and puzzles with each stage to keep you busy, like killing a certain number of zombies in a set time or spending a limited amount of sun.

The best part? It’s completely free to play! Unlockables in the game can either be bought with real money or you can grind for keys in the actual game. Considering the original game went for $20, I think it’s a fair trade.