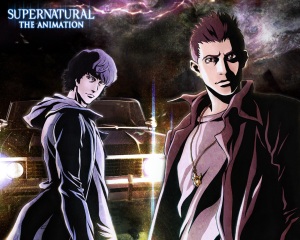 Happy Halloween, ladies and gentlemen!  Now I’m sure some of you have heard of the popular TV series called Supernatural, right?  In case you haven’t, the show is of the action, horror, and supernatural genre (see what I did there?).  The main characters are Sam and Dean Winchester, two brothers out to deal with evil spirits, demons, Pagan gods, and urban legends.  Now what makes the series so popular is its superb balance of humor and seriousness that goes along with a compelling story.  Each episode carries a new adventure and introduces new faces, while still contributing to the strong and overarching themes of the season.  This series was so popular that it received an anime adaptation in 2011 by Madhouse studios.  The Supernatural anime consists of 22 episodes, recapping some of the memorable adventures from the first two seasons and throwing in a few anime-original filler episodes.  Unfortunately, every episode is cut down to a 20-minute run, so each adventure is condensed quite a bit.  No need to worry though, as this adaptation does have its strong points.

“You better take care of that car or I swear I’ll haunt your ass.”

The animation does a good job with capturing the relationship between the brothers and doesn’t cut out too many details.  Although the anime does change around a few details with the story, you’ll still get the main idea and enjoy the mystery/action.  Some of the anime-original episodes are also pretty interesting, so a fan of the original series could also have a reason to give this adaptation a chance.  The visuals are generally dark and shady, but fit the overall feel of the original series pretty well.  The background music is actually quite enjoyable and assists in expressing the emotions or thrills in each episode.  The relative shortness of the episodes can also be a benefit, as each episode can be used as an enjoyable little break.  If you are new to the series, the Supernatural anime could be a good way to transition into the real deal, as you can just jump into any episode and enjoy the action without needing much background information.

“Hold me Sam. That was beautiful.” – Dean

Now if you are a fan of the original TV series, there may be a few things that aren’t too great.  Firstly, the English-dubbed version features the original Sam’s voice, but brings in a new voice actor to represent Dean.  Along with this, Bobby’s character has been completely downgraded in the few episodes he pops up in.  These shortcomings are fairly unfortunate, but you can probably enjoy a few things if you just troop through them.  In the end, the original series will obviously be superior, but the anime is a worthy supplement to it.  The presentation is good and each episode is a quick-and-easy fix of mystery, horror, and action, so I would certainly recommend it.  Also, the rocking ending theme they chose has to be one of my favorites.  Well that’s pretty much it for now, so I hope you all have a happy Halloween and remember to be safe!

“Carry on my wayward son….”