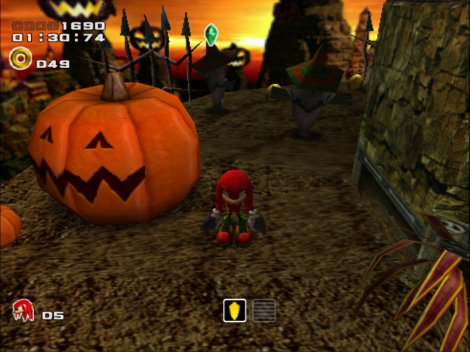 When you think of scary music in video games, you typically of dissonant orchestral hits, grumbling low strings, or distorted drones. This is important for building up a terrifying atmosphere, but as standalone music it’s terribly boring and generic. That’s why I decided to take a look at some of the dark, spooky, and Halloween-themed areas in video games, along with their themes.

I like to use the term “spooky” because not only is it a funny word, it implies a fun side of Halloween that often gets overshadowed by the need to always be frightening. It’s what gives Halloween its personality, and I hope you’ll find that my list of spooky themes captures this spirit of fun and fright that Halloween is meant to convey.

Let’s get this started on the right foot, with music from who is essentially the Danny Elfman of video games, Grant Kirkhope. Banjo Kazooie as a game itself has a very autumn feel to it, using a lot of brown and orange in its color palette. Of course, the main villain is a Wicked Witch wannabe too. The game takes to a variety of colorful locales, one of which is the one and only Mad Monster Mansion. This theme shows off a more of the comical side associated with Halloween, and with Banjo gaining the ability to transform into a pumpkin in this world, I think it’s only fitting.

Ah yes, the infamous creepypasta anthem. Personally, I don’t find this theme creepy at all, but rather an atmospheric and relaxed theme for a small town tucked away in the mountains. Sure, there’s a huge cemetery in Lavender Town and it gets turned into a radio station in the next generation of games, but that doesn’t mean it’s haunted…right? The track itself is so different from anything else in the game that it’s easy to see why everyone latched onto it as the harbinger of spookiness.

Chances are, if you’ve played this game, then you’ve spent the majority of your time looking for those infernal emerald shards with Knuckles. That means you should be pretty familiar with this theme and the others too. Thankfully, the music in Knuckles’s levels are so chill and funky that emerald hunting feels like less of a chore. Though, when they starting taking longer than half an hour, any music will start to get old. This stage is particularly cool to me because it’s kind of like an early version of Super Mario Galaxy. Little islands in the sky with bits of Halloween on each of them.

Speaking of Danny Elfman, we have what is probably the most festive entry on our list. Without the lyrics, it fits perfectly within the JRPG atmosphere. There really isn’t much else I have to say because I’m sure you all know this song. Very rarely do we get to see Halloween as a holiday celebrated so openly in a video game, particularly with the nice costumes that Sora, Donald, and Goofy get. Just listening to it brings back memories of fighting along side with the Santa of Christmas himself, Jack Skellington.

I feel like Doopliss can easily be the poster boy for Halloween, just as well as Jack can. After all, he wears a party hat! This definitely one of my favorite boss themes in the game because it has a nice mix of the Danny Elfman mystique that we’ve been hearing in the previous entries along with a more manic, carousel of doom sound. Oh yeah, gotta love the church bell used throughout the track. In the game, the sound of the bell turns villagers into pigs and hearing it used so nonchalantly in the boss theme is pretty epic.

This track is fairly unique compared to the every other entry. It’s not particularly creepy or comical. It’s stative and persistent, using a 6/8 meter to give off the feel of a death march or even a funeral procession. I’ve also noticed that 6/8 is a popular meter used to imitate trains, also seen in the Final Fantasy VII’s opening. Given that the Phantom Train delivers departed souls to the afterworld, the music feels appropriate.

Lauded as one of the hardest games in existence, Super Ghouls ‘n Ghouls kicks your ass while spitting out kickass music. The theme of very first stage doesn’t hold anything back. There’s monsters flying around at every turn and the stage constantly shifts. The music does a great job of essentially reenacting all of this in musical form. After an incredibly cinematic intro line, the music goes into bold and heavy rhythms to represent the hero’s courage, but kind of goes off into different directions with voices mimicking each other.

This theme might actually sound scary, if it didn’t feel so Mario-like. But that’s why I love it. It’s so simple with it’s distorted pulses and uses the silence to fill in the rest of the work. The wailing organ is also a very nice touch to create that traditional haunted mansion feel. Despite being scared out of his pants, even Luigi finds time to hum along with the music when ghostbusting the halls of his new mansion.

Frantic Factory takes the Danny Elfman approach with mallet percussion and strings pizzicato. Even though there’s also a world called Creepy Castle, I much prefer this stage. I think this music is what jumps this world up on my favorites list for this game. Haunted castles are been there, done that, but scary toy factories are pretty cool, right? I also love the arrangement of the theme that’s used for the battle against Mad Jack, the boss of Frantic Factory. So much so, that I put both of them for the number 2 spot.

On the list of video game tracks that I could listen to forever, I think this one would rank pretty high. Castlevania wastes no time and throws into the action, with appropriately amazing music. Driving bassline, a catchy melody, and great use of offbeats make this such an exciting track to listen to. A lot of the style reminds me of something we’d hear in organ music. There are jumpy notes that take advantage of its wide range, pedal bass notes, and nice fat chords. Definitely check out the acapella version by SmoothMcGroove too.

I apologize that this list is so Nintendo heavy, but that’s because that’s all I really know. Though, I guess you could argue that Nintendo just knows how to have more fun than other companies. That said, what are your favorite spooky video games?