This series is really close to being one of my favorites from this season. It has everything that I am looking for in a series that isn’t very serious. There is a romance that I like, that romance gets a lot of support, and there is a focus on a couple that I ship. Did that sound a bit redundant? Well, that is all I really need from something without a deep plot in order to enjoy it. It is a personal preference, but I am the one writing. 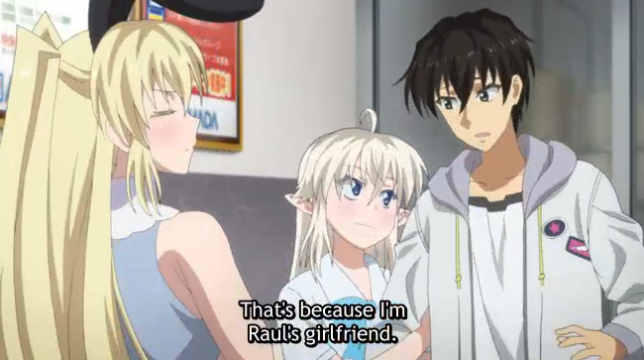 It needs to be true.

The undercover mission was compromised when Raul and Phino met Airi. She was too embarrassed to tell Raul that she took a day job, but she continues to hound Raul about not following his dreams. Apparently, Airi made it into a big company after the hero thing fell through, but she was fired after a few months. After getting over the uncomfortable stuff and the romantic comedy antics, Airi showed the lovebirds around the store. Very sexual things occurred and Airi got in trouble for fending off a sexual assault. This led to more shady stuff as the people in charge of Amada busted Raul and Phino for their mission while scolding Airi for being rude to the asshole. On the other end of the story, the rest of the Leon group saw some sweat shop labor that resulted in ridiculous prices. The deals were good, but they literally worked some little monsters to death. Leon planned to strike a deal with this evil manufacturer, but they already partnered up with Amada. Things could be worse. It isn’t like Raul declared war while he was at Amada. Oh wait, he did and Leon has no way to fight back. Their service did get a customer, but there appears to be trouble. What will happen in the next episode?

I like the new direction that the series is taking. Did anyone else notice that we are suddenly getting a satire? This is basically the big department stores taking out the little guys with unbeatable prices. How do they get those prices? Buy products from manufacturers that use what is essentially slave labor. Those little monsters that work until they die for no pay makes me think of a sweat shop. People work themselves to death or commit suicide due to harsh work environments. For those of you that don’t watch the news, this is what actually happens. Is this an oddly serious thing to be touching on in a series that is known for romance and borderline hentai? Yes, you never know what to expect from anime. I am curious to see how Airi handles this situation. She may need the money, but I doubt that a person who dreams of being a hero is comfortable with working at such a shady organization.

Honestly, I don’t think that I truly care about anything aside from the relationship between Raul and Phino right now. I know that there are other things going on, but I am kind of tunnel visioning this anime. Is that a good thing? Only if the series is bad. I don’t think that this is a great series, but it doesn’t have a lot going for it. They aren’t utilizing the minimum wage job angle as well as Hataraku Maou-sama! and the level of ecchi is far too high for a serious series. I don’t think that I have ever watched a series that featured this many obvious ejaculation scenes. My tone may change if I start watching more pornography, but this is pretty intense. Monsters should not explode like that. Oh well, the writers are going to do whatever they want in this situation. I think that Yu-Sibu isn’t going to end up being extremely popular, but there is good reason for that. I hope that I am wrong and I start enjoying this series more, but there are other things that I like more right now. Strike the Blood comes out on the same day as this one.