I thought that there would be a bit of romance in this series, but I did not expect it to come from Funabashi. That is right Funabashi likes a guy and the person in question will shock quite a few people. Saeki is the one that is most affected by this crush and I think that she may not approve of it. Who is the guy in question? Saeki’s dad. I had a nice laugh as well.

Satoru started going to the same school as Saeki. Even on a team that is full of big shot kendo guys, Satoru has quickly made a name for himself. He has become a regular member and the girls have taken notice. Apparently he is very handsome and the serious attitude is doing it for them. The honesty has become a bit troublesome. When asked about his home, Satoru stated that he was staying at the same shrine as Saeki. That has become the talk of the town, but rumors aren’t the killer thing here. All of the girls are going to Saeki for answers about the mysterious transfer student. Saeki has become tired of this and even her friends are joining the fun. Funabashi and Yumi are headed to Saeki’s place for a welcoming party. They try to break down the walls that Satoru is putting up. They failed at first, but the guy starts to warm up to the girls. Haru may not be the biggest fan of what is going on, but she knows that Satoru needs to make some human friends or else he will not get to lead a normal life.

I am actually starting to really enjoy this series. Is it still a bit boring? For the most part, yes. However, I don’t need anything with a deep story, tons of action, heavy comedy, or big time romance right now. I am watching too many other things right now that fill those roles fairly well. This is a casual watch that I look forward to. Let’s call it a palate cleanser. It is like those oranges that you eat at Japanese restaurants. That linked in a lot of ways didn’t it. You know, because this is an anime and Gintaro likes oranges. I just explained something and that took away from the charm didn’t it? For those of you that don’t know, I am a very lame person. My friends have gotten used to it. Well, the ones that still talk to me that is. What else was good about this episode? Haru is still being adorable. I think that she is my favorite part of the series right now and that isn’t a bad thing. I want a Haru plush now. 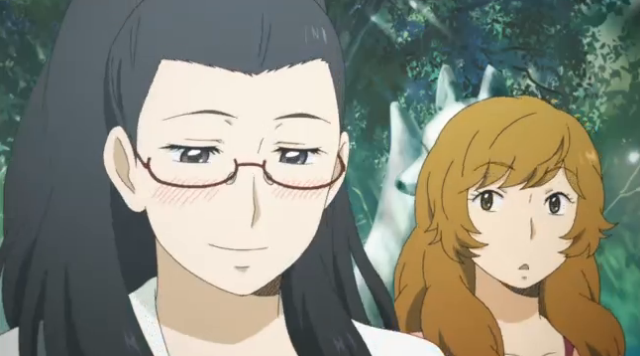 Funabashi has odd taste in men.

I know that I already mentioned it, but it was pretty odd when Funabashi showed that she has a crush on Saeki’s dad. That is just odd. I know that Saeki’s dad seems cool and all, but that is a grown man and she is a high school student. Someone has been reading too much shoujo manga that fetures the teacher/student relationship stuff. Do any of you read those? I have read a few and I think that they are pretty hit and miss. I read Faster than a Kiss and enjoyed it, but I don’t think that I have read any full series like that and enjoyed them. There have been a few nice one shots, but that is pretty much it. I want to see Haru’s reaction if Saeki ever goes on a date with Satoru. I think that the little herald would lose her shit and Gintaro would have to hold her back. It would be pretty funny, but I am not sure if it will actually happen now. In my eyes, this series is going to stay more tame than that. Unless you think that all three girls are going to have relationship issues at some point. Then Satoru is the only choice for Saeki.

Such a nice picture.

One response to “Impression – Gingitsune, Episode 06”