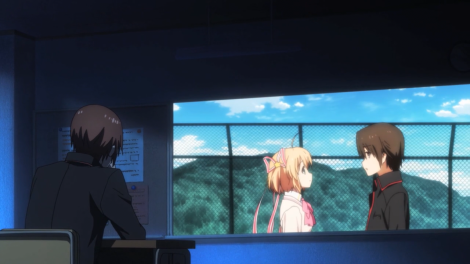 So I just finished re-watching Angel Beats! yesterday, and now I wake up to this. Brilliant, but I don’t know if my emotions can handle the repeated beating. This episode appears to follow the pattern of focusing on one of the original members of the Little Busters, and this time it’s Kyousuke’s turn. The very leader himself. Except this time, I guess you can say that he’s in the most need of help.

It’s the complete role reversal that makes things so unsettling and emotional because for the entire series, Kyousuke has been this pillar of strength for Riki. And now, Riki has taken on the same leadership role that Kyousuke had been to bring the Little Busters together in the first place. Just like how Kyousuke was there to save Riki in his time of need, Riki is now in that role.

I love how they go about handling the flashbacks. Kyousuke’s memories are artistically superimposed around various bits of scenery, as we painfully relive the events of the previous reality from his perspective. I appreciate this because it’s practically been an entire year since I’ve watched the first season. With these memories, come very startling and upsetting revelations.

It’s honestly hard to tell sometimes what is actually happening because I feel like what I’m seeing could be just an abstract presentation. Like, is Kyousuke really escaping from a bus accident or is that just a symbol of his eternal struggle? I guess regardless, we know for sure that Kyousuke has some power over reality and it might be because he isn’t supposed to actually be there. 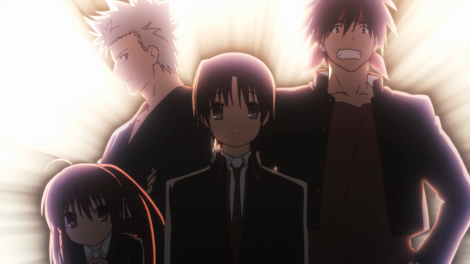 He mentions he and the others that he brought to meet Riki and Rin all shared the same fate, which I assume means died prematurely somehow. If that’s true, that is just incredibly sad and upsetting. These characters that we’ve grown attached to were merely ghosts to begin with and had to disappear when Kyousuke’ power began to fade. It’s like Angel Beats! but without the possibility of reincarnation.

Kyousuke mentions that everything will begin again, and the fact that the next episode is titled “The End of the World” worries me. I want to stay optimistic that there will be some happy ending to extract from this, but I just can’t see it at the moment. Is it too much to ask for everyone to be happy?!

“Everything is over. And now, everything will begin.” ~ Kyousuke Natsume