Just when things were going so smoothly, a few hiccups occur in the plan for our intrepid heroes. Actually scratch that. There’s been nothing that has gone right since the plan’s beginning. Everything that could have gone wrong did, and I’m not sure how I feel about that. For me, it feels a little cheap, like the creator just wanted to throw out every possible bad scenario into their faces to create tension. Maybe it’s just because these events are happening so quickly, one after the other. If there was more space between each turn of events, I think this wouldn’t have been as big of a problem. 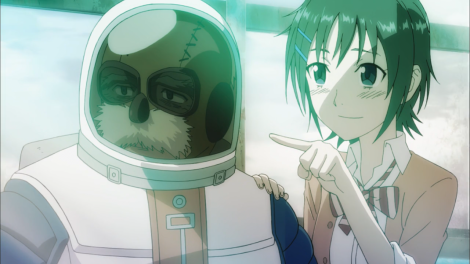 Despite all of the shortcomings, three of the characters manage to make the series enjoyable for me: Aoi, Ibara, and Kanon. In Aoi’s case, she’s an overactive comic relief character voiced by Kana Hanazawa so there are literally no complaints to be had from me in that department. She’s also capable of rising up to the challenge when the circumstances call for it, which is doubly awesome. We also have Ibara, the Kansai-speaking gun slinging badass. I love girls with guns and her accent is pretty adorable. But more than that, I just like how virtuous she is. All she’s ever known is the concept of saving people, no matter who they are, and extends a kind hand even to her “enemies.”

Then we have Kanon Ozu, whose motives for total destruction stem from her fear and hatred towards her human creators. This episode, we learn that due to the infusion of electric eel blood, her sense of touch has been replaced by the ability to generate electricity. Unlike Mikoto Misaka from Railgun, I assume Kanon has less control over her powers and that electricity is constantly flowing from her body. It’s also doubly sad when Shion begs Kanon to kill her because of how much pain she’s in.

Like humans, death will come at some unexpected time for Kanon and the other members of Coppelion. The difference is that Kanon is planning to take everyone down with her, giving her a sense of control over her own fate.